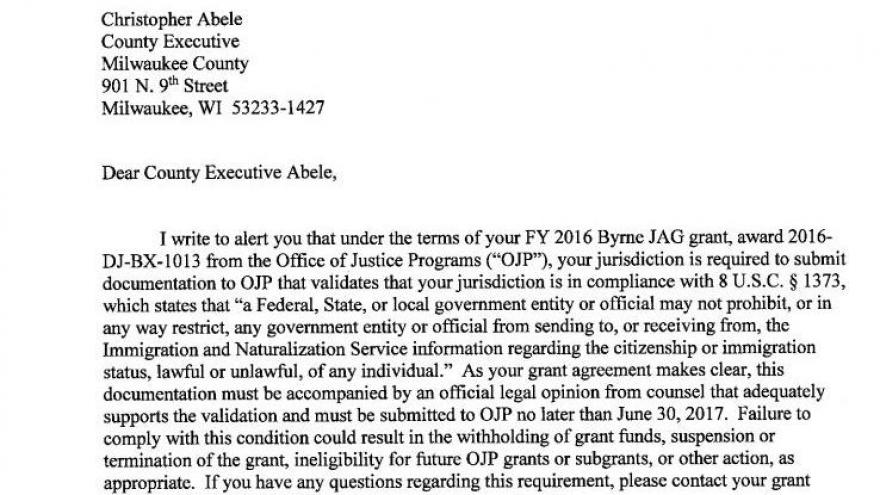 MILWAUKEE (AP/CBS 58) The Department of Justice is warning Milwaukee County that they could lose more than $900,000 if they don't comply with immigration laws.

The DOJ is threatening to pull the Edward Byrne Justice Grant which the county has received for more than 10 years.

County Executive Chris Abele and District Attorney John Chisholm held a news conference in response to the threat this afternoon.

In response to the press release sent by the DOJ, Chris Abele said \"This is language that encourages people to mistakenly think and conflate immigration with crime. Statistic and study after study show this is simply not true. For 20 years, nationally and in every city, immigration has been going down and crime has been doing down despite this sort of rhetoric, and it's very hard to see how public safety is being advanced by this sort of press release.\"

\"You can imagine the burden it would place on both the state and the local taxpayer were we to lose those, and the most frustrating thing about it is we have always had a great relationship with the federal government because we do exactly what we are saying we're going to do with the valued resources we're given and we always get good results for that,\" said Milwaukee County District Attorney John Chisholm.

According to the Associate Press, The Trump administration is moving beyond rhetoric in its effort to crack down on so-called sanctuary cities that refuse to cooperate with federal immigration authorities.

The Justice Department is forcing nine communities, including Milwaukee, to prove they are complying with an immigration law to continue receiving coveted law enforcement grant money.

The department sent letters Friday to places its inspector general previously identified as having rules limiting the information that can be provided to federal immigration authorities. They include others such as California, Chicago, New York and Philadelphia.

Officials there must provide proof from an attorney that they are following the law.

It is an extension of Attorney General Jeff Sessions' repeated threats to crack down on sanctuary communities by denying or stripping them of grant money.