Do modern dads get enough credit? 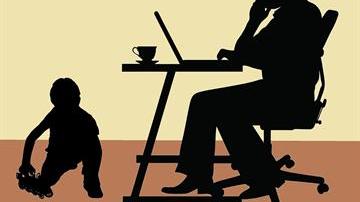 (CNN) -- This week, the White House held its first ever conference on working fathers.

The \"Today\" show's online parenting platform changed its name from Today Moms to Today Parents, and added a half-dozen fathers to its writing corps.

\"The View\" featured a stay-at-home dad during a special segment honoring Father's Day.

And a heartwarming video saluting daddies across America (try not to tear up while watching it) by Dove Men + Care garnered nearly 3 million views on YouTube.

No one of these developments means dads today get the same level of respect and attention as moms do from society, the media and marketers. The events don't signify an end to the often depicted portrait in pop culture of the clueless, uninvolved dad, but together they symbolize how modern dads, to borrow a phrase women have used for a long time, have come a long way, baby.

Vincent O'Keefe, a stay-at-home dad from Cleveland with two daughters, ages 14 and 11, said fatherhood today is \"kind of a foreign country\" compared with what it was like growing up with a father who, like most men with children then, worked outside the home.

O'Keefe describes some of the \"absurd situations\" he's found himself in as the primary caregiver to his girls, including getting slammed in the head by a toilet seat when he was trying to potty train one of his daughters during a \"Mommy and Me\" class.

\"Those are all situations my father never would have been in,\" said the professor-turned-parenting writer who hopes to publish a humorous memoir he recently finished titled \"Been There, Wiped That\" about his journey as a stay-at-home dad.

Shifts in perceptions of modern dads

O'Keefe and other fathers across the country I talked with said they've noticed a dramatic change during just the last decade or so in the way fathers who want to be more involved in their children's upbringing are perceived.

Jim Higley, the dad who appeared on \"The View,\" said when he left corporate America to become a full-time, stay-at-home dad that \"people were scratching their head.\"

\"Today, less than 10 years later, I feel very different,\" said Higley, a Chicago father of three, radio host, author and creator of the site Bobblehead Dad. \"I think with each passing year, we're starting to get comfortable with the reality that men and women both have the capacity to be nurturing, caring parents.\"

O'Keefe admits that 14 years ago, when he first started parenting full time, he needed \"an ego of steel\" because he got plenty of negative comments, primarily from men. One man, upon learning about O'Keefe's role, asked his wife, \"Oh, what does he tell his buddies at the gym?\"

But while O'Keefe said he'd get maybe two insults a month 10 years ago, today it's down to about two a year.

\"In fact, it used to be there would be a snarky, 'Oh, it must be nice' kind of thing to almost now a more genuine, 'It must be nice,' meaning a lot of men would like more time with their kids and they do kind of envy me.\"

The numbers further illuminate the changing role of today's fathers: The number of stay-at-home dads nearly doubled since 1989, a recent report by the Pew Research Center finds, and the amount of time fathers spend with their children has tripled since 1965, according to a 2013 study also by Pew.

In another survey last year by the organization, Americans said they believe a father today should be more of a \"moral teacher and emotional comforter\" than someone who brings home a paycheck or disciplines a child for acting out.

Fathers are increasingly being perceived as \"parents\" with all the responsibility the word entails, and not \"baby sitters,\" said Oren Miller, a blogger and father of two near Baltimore, who created a Facebook group for dad bloggers in 2012. The group has grown to nearly 800 members.

Sure, there are still people with conservative views about what fatherhood means and the level of involvement fathers should have in their children's lives, but they're \"becoming a minority,\" said Miller, who is also a stay-at-home dad. (His children are 4 and 6.)

\"It's an age thing even more than a political-leaning thing,\" he said. \"The (Facebook) group itself has a lot of people from the right and the left, and they all agree on that one thing -- that involved fatherhood is important for everyone.\"

Identity issues real for some men

But the definition of what it is to be a man and a father today is still not so clear to many men, believes David Le Roy, a father of two boys who created a Facebook group for African-American fathers last year. Le Roy said he grew tired of news stories and depictions in pop culture of black fathers who were never around -- a portrait that didn't mesh with his approach to fatherhood or those of his friends.

\"We need to define who we are, what we are and kind of have a clear understanding of what we should expect of ourselves and what others can expect from us,\" said Le Roy, who owns a technology firm in Chicago.

One way to do that is by increasing the conversations among dads, which is something Le Roy has tried to do with his Facebook group, which now has nearly 200 members.

\"If you have pearls (of wisdom), let's share them ... so we could all empower and help each other because we don't have a playbook,\" said Le Roy, whose boys are 7 and 9.

More and more men are opening up to each other, believes Brian Gresko, a Babble.com contributor and father of a 5-year-old in Brooklyn, New York. Gresko recently edited an anthology of 22 novelists writing about fatherhood called \"When I First Held You.\"

\"I think (the book) is part of this growing movement of guys being very upfront about their experiences as dads and wanting to engage with all these complicated emotional questions we have as parents,\" he said.

Are brands getting it?

But are the media and marketers in sync with the emerging, more nuanced, portrait of men as involved fathers working to improve their parenting skills?

\"It's getting better,\" said Gresko, pointing to research conducted by the site 8 Bit Dad, where two fathers keep a spreadsheet of how dads are depicted in advertisements.

\"On the whole, the majority of ads are starting to catch up,\" Gresko said. \"That's not to say that there are not egregious examples ... dads shown as being ridiculous or totally clueless.\"

Miller, the creator of the Facebook group for dad bloggers, said he believes for the most part companies are getting it.

When I asked what it will take for modern dads to be viewed as interchangeable with modern moms, the dads pointed to more and more fathers playing a larger role in their children's lives; more reality-based portrayals in television, film and commercials of modern dads; and more policies supporting fatherhood, including paid paternity leave.

O'Keefe, the Cleveland father of two, said it will also take something else: time.

\"A cultural change happens slowly, although with social media and media in general it can happen quicker than it used to.\"