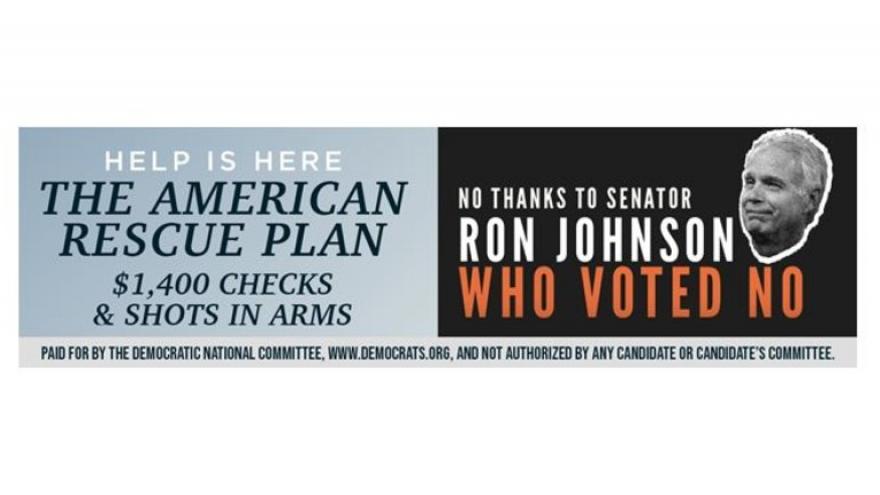 The ad, titled “Help is Here,” highlights how President Biden and Democrats have delivered real, tangible results for Wisconsinites and their families by making the American Rescue Plan a reality.

“When President Biden took office, he promised Wisconsinites that help was on the way — and now, thanks to his leadership and a united Democratic Party, help is here,” said DNC Chair Jaime Harrison. “The American Rescue Plan is the bold and historic action we need to combat this virus — and now it’s the law of the land despite Republican Senator Ron Johnson voting to block it. With measures including direct payments of $1,400 per person and resources to help manufacture and distribute vaccines, it will provide the relief working families need and overwhelmingly want, while showing that the government is again working for the people.”

According to a news release from the Democratic National Committee, the billboard -- located along I-94 near the 84th Street exit -- also highlights that this bill passed without the help of Senator Ron Johnson, who worked tirelessly to block the bill despite its widespread support among the American people, including a majority of Republicans.

“Voters in Milwaukee won’t be able to miss this message: help is here, and it’s because of President Biden and Senator Tammy Baldwin, not Senator Ron Johnson who opposed this bill and the relief it provides Wisconsinites,” said DNC Chair Jaime Harrison. “With measures including direct payments of up to $1,400 per person and resources to help manufacture and distribute vaccines, the American Rescue Plan will provide the relief working families need and overwhelmingly want, while showing that the government is again working for the people.”