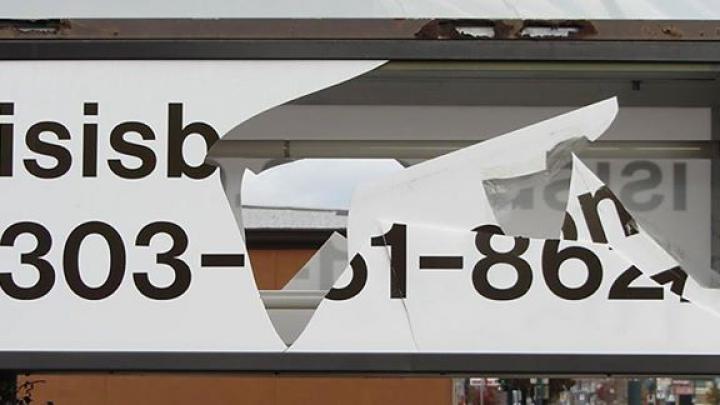 (CNN)What's in a name? Apparently a lot of expensive headaches.

Isis Books & Gifts in Denver has the misfortune of sharing its name with the terrorist group.

Over the weekend, someone threw a brick through the sign outside the business. It's the fourth time in recent months someone has vandalized the bookstore.

"We're all very heartbroken (about the Paris attacks) so I don't know if somebody walking down the street just saw our name on the sign and kind of lost it for a moment and threw a rock through it," Karen Charboneau-Harrison, the store owner, told CNN affiliate KDVR. "Or if it was an ignorant person who actually thought this was a bookstore for terrorists, I don't know."

Isis Books & Gifts takes its name from the Egyptian goddess of childbirth and healing. It's a spiritual store that has been in business 35 years and embraces many faiths.

"What we do here is we celebrate the world wisdom traditions," said Charboneau-Harrison. "We have books about Hinduism, Buddhism, Goddess Spirituality, Native American shamanism, really the gamut. So what we are about is people's spiritual paths."

A problem for lots of businesses

The ISIS moniker isn't a headache just for the Denver bookstore.

According to the U.S. Patent and Trademark Office, more than 270 products or business names among active federal trademarks use "ISIS." They range from pharmaceutical companies to wig makers to phone apps.

Among them is Isis Pharmaceuticals (ISIS).

It told CNNMoney it's now considering changing its name. No final decision has been made and it's not clear what new names are being considered.

"Even though people know we're not associated with the terrorist group, the name itself has so many negative connotations," said D. Wade Walke, the company's vice president for corporate communications and investor relations. "It's obviously not getting better over time."

As for the Denver bookstore, owner Charboneau-Harrison says her business is getting support from customers and total strangers.

"We get calls from people who say I've never shopped there but I'm 100% supporting you all, and they're all sending us love and light and I know that is creating protection around us."

The store is also lobbying on its Facebook page to get the world to refer to the terrorist group by its Arab acronym: al-Dawla al-Islamiya fi al-Iraq wa al-Sham or Daesh. Not only is it an accurate name for the group, it's similar to an Arabic word that means to crush under your foot.

And frankly, ISIS hates the term. It's threatened to cut out the tongue of anyone who utters it.

The Pentagon started using Daesh last year. The French government is on the bandwagon. President Obama has used it, too, since last week's attacks.

"We deliberately named ourselves 'Isis' to honor the goddess and to have the protection of that goddess," said Charboneau-Harrison. "So, we're not changing our name."