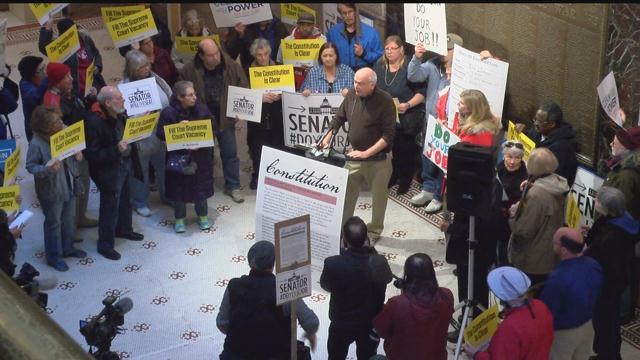 The brewing fight over a vacancy on the US Supreme Court is taking center stage in the State's US Senate race.

A small group of demonstrators gathered at Milwaukee City Hall on Monday to demand that Senator Ron Johnson give President Obama's Supreme Court nominee a hearing and a vote.

"It's very clear that they are playing partisan politics with the highest court in the land. Something that was set up to be above Democrats and Republicans and Americans all across the country both democrat and republican and independent are saying that we want a new Supreme Court justice before next January," said Jonah Hermann, Comm. Director League of Conservation Voters.

Johnson has maintained his party's stance that it should be the next president who fills the vacancy left when conservative Justice Antonin Scalia died last month.