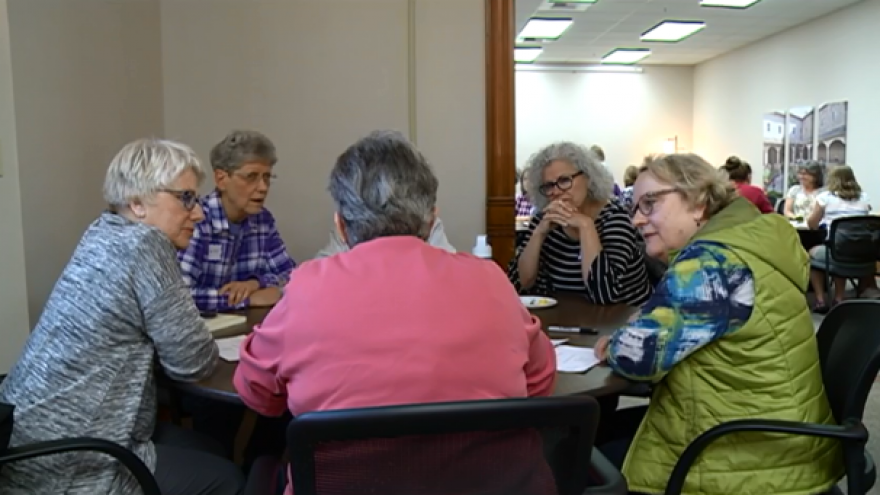 That's why she attended the Death Cafe Monday night at the Franciscan Spirituality Center in La Crosse.

Peterson says the fact that she's not going to live forever, isn't what concerns her the most, it's how she's going to die.

She's hoping a conversation with strangers about death and dying can offer a new perspective.

"I experience more and more death of people I know and I know where I stand as far as dying but I still have concerns."

Death Cafes originally started in the U.K. in 2011, and the idea has since spread across the world.

Death Cafe is meant to normalize conversations surrounding death, which can be a taboo subject.

Death Cafe facilitator Jackie Yaeger says people are generally curious about death but are often times afraid to talk about it.

"When you have a table of strangers, they find it easier to talk about death because they're with strangers and that's kind of one of the underlying concepts of the Death Cafe."

Yaeger says there is an urge to talk about losing a loved one or contemplating one's own death.

"I've worked with so many people in my work in hospice who are given this terminal diagnosis and all of a sudden then they want to do their bucket list, and they want to make sure they've connected with all of those relatives they've haven't seen for a while and all of the trying to accumulate money and all of the material possessions, things goes right out the window."

Peterson echoes that message, and she's choosing to live fearlessly.

"I know I'm gonna be in a better place, I don't have a clue what that's gonna be like, and that's a little bit weird, but no, my faith is the foundation of my life and that's where I come from."

The death cafe is not a grief support group. It's a group-led conversation for people to share perspectives and concerns they may have.

If you're interested in joining the conversation, the next Death Cafe will be held at the Root Note in La Crosse from 10:30 a.m, to 12 p.m. on May 5th.

For more information you can visit their website at www.deathcafe.org.