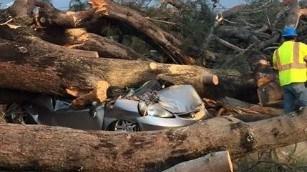 (CNN)Ferocious wind and intense rain have pummeled Southern California, leaving one driver dead and more than 150,000 in the dark.

Across Southern California, hundreds of work crews scrambled to try to restore power to more than 150,000 people who lost electricity in the storm.  And there is more powerful weather to come,  Powerful winds from 25 to 40 mph will gust up to 60 mph Monday from the mountains of Los Angeles to San Diego, CNN meteorologist Rachel Aissen said.

Parts of Los Angeles County over 3,000 feet in elevation could get 2 to 4 inches of snow Monday, Aissen said. Areas with even higher elevations -- over 4,000 feet -- could see more than 6 inches of snow.

In the northeast part of the state, ice dams formed on the South Fork of the Yuba River, CNN affiliate KCRA reported.

The frozen blockades -- and a recent onslaught of rain -- caused a backlog of water, flooding parts of Soda Springs, the affiliate said.

"We can blame it on El Niño," Vic Ferrera of the Nevada County Office of Emergency Services told KCRA.

By Sunday night, the affiliate said, crews had managed to break through an ice dam, allowing some of the water to subside.