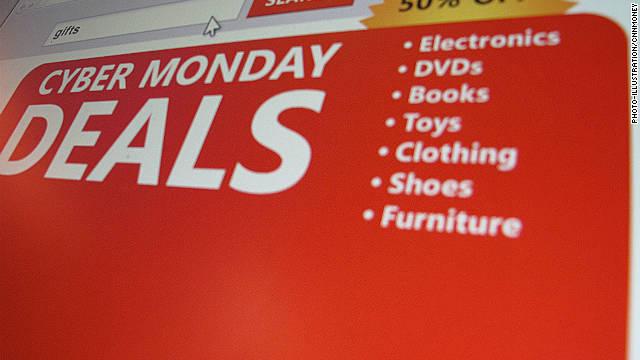 (CBS NEWS) It's official: Cyber Monday was the biggest ever online shopping day in the U.S.

E-commerce sales hit a record $2.68 billion on the first business day following the Thanksgiving Day weekend, up 17 percent from the previous year, according to data from Adobe Systems and confirmed by Forrester Research.

The surge was good news for retailers amid reports of softer consumer spending on Black Friday, while also underscoring the transformative shift in recent years in how Americans shop. For instance, Walmart (WMT), the world's largest retailer, called Cyber Monday \"the biggest online day in its history for orders.\"

Several factors seemed to put consumers in the holiday spirit, according to economists. Plunging gas prices around the country is freeing up cash for consumers, bolstering spending, while the job market also is improving. Consumer confidence has risen in recent months.

\"In general, consumers value the web for a few key reasons -- it is easy to shop online, one doesn't have to hunt for parking, web stores are open 24x7 and prices online are often cheaper,\" Forrester's Sucharita Mulpuru-Kodali in a note to clients. \"Those truths ring true even more during the holiday season when shoppers are time-pressed and expect deep discounts.\"

Forrester's estimate for online sales yesterday were an even stronger $3 billion. The research firm forecasts total online holiday season sales of $89 billion, which would represent a 13 percent increase from a year ago. It would almost amount to roughly 14 percent of total retail spending in November and December, and a hint of things to come.

\"While online sales still represent less than a fifth of total retail shopping, consumers consistently report that they intend to spend nearly half of their holiday budgets online,\" Tyler White, senior analyst with Adobe Digital Index, told CBS MoneyWatch. \"On average, 33 percent of consumers plan to spend more online this year, but among 18-to-34year-olds, that number goes up to 43 percent -- so the future looks bright for online shopping.\"

Between 2010 and 2014, the share of U.S. retail sales occurring online surged by 50 percent, from 4 percent to 6 percent. E-commerce is expected to grow even faster in coming years as more people become comfortable shopping on the web and the popularity of devices such as tablets and smartphones continues to grow, said Corey Pierson, CEO of Custora.

\"It's not unthinkable that in five to 10 years, between a third and a half of U.S. retail will be done online,\" said Pierson, whose firm provides shopper analytics to retailers, in an email.

Forrester's Mulpuru-Kodali predicted that online shopping could amount to some 20 percent of retail spending within a few year.