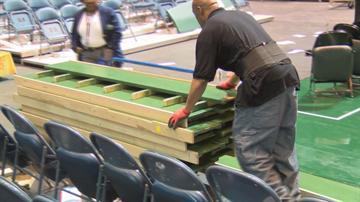 MILWAUKEE -- In just a few days, the BMO Harris Bradley Center will look rather different than it did Sunday morning as Milwaukee prepares to host early rounds of  the NCAA tournament.

But getting to that point will take a lot of manpower.  Crews started pulling up floor boards only about an hour after the Bucks game ended Sunday afternoon.

\"They'll be working almost non-stop here over the next 72 hours to get us ready by the end of the day Tuesday,\" Dworak said.

Bradley Center crews will install the new tournament floor Monday.  They'll also swap Bucks, Admirals and Golden Eagles signage for NCAA logos and branding.  Some of the courtside areas will turn into a media center and additional food vendors will move into the concourses.

\"Really rolling out the welcome mat for all the teams that will be here in Milwaukee, the eight teams and the media from around the country and the NCAA as well,\" Dworak said.

Milwaukee last hosted tournament games in 2010.  The Bradley Center won this year's bid about 18 months ago.

\"Getting that energy in the building and for the downtown area around us,\" Dworak said.  \"People who are coming, checking out bars and restaurants in the area as  well.\"

The general manager expects sold out crowds of around 18,000 people no matter who plays in Milwaukee this weekend.  But he admits drawing the Badgers certainly helps.

\"Having a home team in the state like that here would make it that much more exciting,\" Dworak said.

Games start in Milwaukee on Thursday and continue on Saturday.  The Badgers will face American University Thursday.