Crash temporarily shuts down lanes on US 45 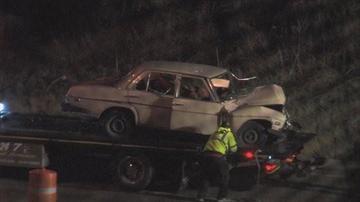 MILWAUKEE -- A three-vehicle crash shut down two right lanes of southbound US-45 at Wisconsin Avenue for nearly two hours overnight.

Emergency crews responded around 1:00am.

The Wisconsin DOT confirms a driver was going the wrong way, traveling northbound in the southbound lanes.

The driver crashed head-on into a bridge pillar in the right distress lane.

Kara M. Whitlow, 23, of Waukesha, was identified as the driver.

She was trapped in the vehicle, but did not sustain life-threatening injuries.

A blue 2005 Jeep, was in the right lane further south of the crash, and had been struck by

One of the two occupants complained of minor injuries, is six weeks pregnant, and was transported to Froedtert Hospital.

Neither of the two occupants of the Dodge was injured.

Whitlow was extricated from her vehicle by the Wauwatosa Fire Department and conveyed to Froedtert Hospital for treatment of a broken foot and facial lacerations.

Whitlow was arrested for 2nd Degree Recklessly Endangering Safety, DUI-2nd Causing Injury, and OAR/OWI-related. If convicted of all charges, she faces up to 17 years in prison.

Her prior DUI conviction is from March 2012.

Whitlow stated she had consumed two glasses of wine and one vodka beverage at On the Border, and two beers at Paulie’s, 8031 W. Greenfield Avenue.

She also said she had smoked marijuana earlier that day. She entered the freeway the wrong way at 84th Street.