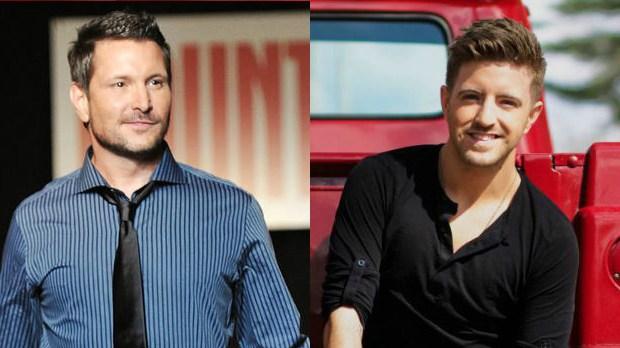 There are plenty of country songs about how to be a man. One way is to face the music, and two country crooners did that on Thursday.

Ty Herndon and Billy Gilman came out as being gay.

Herdon went first, in interviews with People Magazine and Entertainment Tonight. His revelation inspired Gilman to do go public as well.

Gilman posted a message to YouTube, thanking Herndon for breaking the ice. He preferred telling his fans directly, from the comfort of home, to sitting down with the press, he said.

But an encounter with a journalist also prodded him to spill the beans before someone else did. The reporter bumped into Gilman in a public place and snapped a photo of him -- with his partner.

\"It was in that moment that I knew that I'd rather it be from me than you reading it somewhere else,\" Gilman told fans. He also feared being ripped over his sexuality in an article.

In the genre of country, Thursday's tune was a tough one to sing, Gilman said. \"Being a gay, male country artist is not the best thing.\"

At age 26, he's had a long career, having rocketed up the charts at age 11 with his then silky, pre-voice-change alto pipes, according to his biography on AllMusic.com.

Rumors about his sexual orientation have been going around, he said, and he thinks major music labels may have thumbed their noses at him over it.

\"I knew something was wrong when no major label wanted to sit down and have a meeting and listen to the new stuff,\" he said.

In his video, he turned directly to fans with his latest song, giving them a preview on his laptop of the music video to \"Say you Will,\" which is still in edit.

\"Today, I get to tell the world that I'm an out, proud and happy gay man,\" he told \"People.\" But he's worried how fans will take the news.

He may find out in just three days, when he performs at the \"Mother Church of Country Music,\" the Ryman Auditorium.

It's home to the Grand Ole Opry.

Herndon is playing a Christmas charity bash for children in need along with Charlie Daniels, Phil Vassar, Andy Griggs and Jamie O'Neal.

The Ryman has said the concert would be sold out.

Herndon, 52, is hopeful he won't face outrage, because he thinks attitudes are changing in the country scene.

Singer Chely Wright came out in 2010 and the open-minded Kacey Musgraves has a song titled \"Follow Your Arrow\" that was just named the Country Music Association song of the year.

As a child, Herndon, a devout Christian, was stricken with fear over his sexual feelings.

\"I was 10, sitting in church and horrified that I might be a homosexual. Whatever that word meant, I knew that I probably was one,\" Herndon told \"People.\" \"And I know there's a lot of those kids still out there. Telling my story is an opportunity to help just one of them.\"

He started coming out to family members in his 20s. But the \"What Mattered Most\" singer, who had a number of hits in the 1990s, kept the news close to the vest.

It wasn't until he attended a Tony Robbins seminar in 2009 that he decided to become more public, he told the magazine.

\"I realized I had an incredible story that could possibly help someone's son or daughter or grandchild's life not be as difficult as mine has been,\" he said. \"Maybe they wouldn't have to go through as much pain and suffering. It's time to tell my truth.\"

Some of the conflict between Herndon's sexuality and his faith bled through a song he published last year -- \"Lies I Told Myself.\" A sign with the word \"Equality\" has the most prominent place in the music video.

\"Yeah, praying's just a waste of time, so why even start,\" the last verse begins. \"The good Lord ain't got time for guys like me. Forgiven's something you won't ever be.\"

A handwritten sign appears in that verse. It reads, \"I'm a sinner.\"

Herndon has since reconciled who he is with God, he said. He loves God, and God loves him back.

One of the lies he told himself, he said to \"Entertainment Tonight,\" was that he can't be gay and be in country music at the same time.

Now, he thinks that's not true.