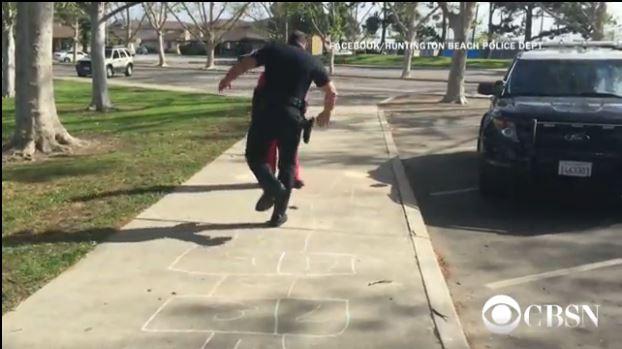 (CBSNews) HUNTINGTON BEACH, Calif.-- A police officer in Huntington Beach, California, is going viral for hopping in to help a little girl -- quite literally.

The Southern California police officer was caught on camera teaching the girl how to play the beloved game of hopscotch.

And the backstory behind the gesture is as heartwarming as the video.

The Huntington Beach Police Department posted on their Facebook page that an officer was checking on a report of a suspicious vehicle in the area. During the investigation, the officer discovered a mother and her 11-year-old daughter inside the vehicle.

They had been living out of their car.

While the officer contacted the Huntington Beach Homeless Task Force, to help arrange housing for the mother and daughter, another officer jumped in to help.

The officer, who police identified as Officer Pricer, began "displaying his expertise in hopscotch."

And soon after, it looked like with the officer's instruction, the little girl was headed towards becoming an expert, too. They even high-fived to celebrate.

From the video, it sure seems this cop certainly does.