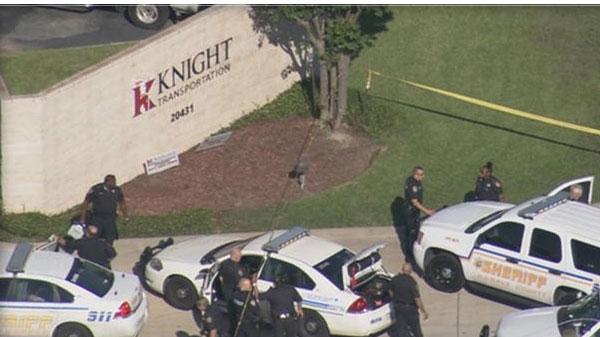 KATY, Texas -- A Texas transportation company employee was killed and another was wounded when a former employee walked into the business Wednesday morning and opened fire, police say.

The shooter then took his own life, according to Harris County Sheriff Ron Hickman. He had been terminated from the business, Knight Transportation in Katy, earlier Wednesday morning, Hickman said.

"Probably being terminated would make him disgruntled," Hickman said.

The former employee was carrying a shotgun and a pistol when he walked into the business just before 9 a.m., Hickman said. Only the shotgun was fired.

Hickman said the injured employee was "nicked" in the face by a projectile. It wasn't immediately clear whether it was bullet.

Nearby, Morton Ranch High School was placed on lockdown, according to the sheriff's office.