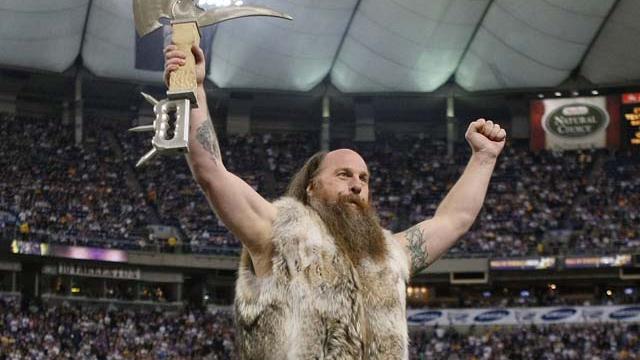 When the Packers head to Minnesota to take on the rival Vikings just before Thanksgiving this year, it appears at least one familiar face won't be on the sidelines for the first time in over two decades: the Vikings mascot Ragnar.

The Minneapolis Star-Tribune is reporting that the Vikes have parted ways with Ragnar after the two sides were unable to reach an agreement on his contract. Ragnar wanted $20,000 per game over the next 10 years, a sizable increase from the reported $1,500 a game he currently makes.

Ragnar was not present for the Vikings' home opener this past Sunday against the Detroit Lions and posted this on his Facebook page:

“It doesn’t feel right sitting at home. This is not by my choice…I don’t make those decisions..At this point it was made for me.I miss all my fans and your support …let’s all stay positive as we move forward.”

A spokesman for the Vikings sent a statement to the Star-Tribune about the situation, saying in part "The Vikings greatly appreciate what Ragnar has meant to the organization and to the fans over the last two decades. We intend to honor his 21 seasons on the field during a 2015 Vikings home game and we will welcome him to future ceremonial events. We will always consider Ragnar an important part of Vikings history."

The Packers play in Minnesota on November 22nd.