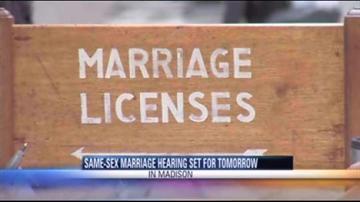 Milwaukee and Dane counties have issued the most licenses since last week's ruling by Judge Barbara Crabb that found Wisconsin's same-sex marriage ban unconstitutional, but there's still open resistance from residents who say same-sex marriage should be banned.

Judge Crabb will hold a hearing Friday afternoon where she's likely to clarify her initial ruling.

Crabb's ruling found Wisconsin's same-sex marriage ban unconstitutional, but didn't specify what should be done about it, leaving an open door for county clerks in all 72 counties to interpret the ruling on their own.

Wisconsin Attorney General J.B. Van Hollen appealed Crabb's ruling to the Seventh Circuit Court of Appeals in Chicago, however, the court asked for more information about why it should intervene since the initial ruling is vague.