Committee approves spending up to $1.2 million to save Boston Store 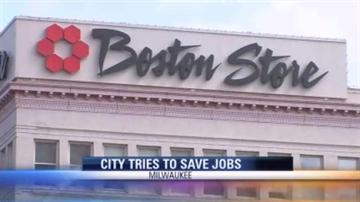 MILWAUKEE -- City leaders approved an investment worth more than one million dollars to save a struggling retail store in downtown Milwaukee.

The Zoning, Neighborhoods & Development Committee voted to give $1.2 million to Bon-Ton Stores, Inc. to help the company keep Boston Store retail and office space at its current location on 4th & Wisconsin. City leaders said it's in an effort to keep 750 corporate jobs in Milwaukee.

\"The concern is that corporate may end up consolidating their offices,\" explained Alderman Michael Murphy, \"right now there are two corporate offices, one in York, PA, the other in MIlwaukee.\"

This measure was only approved by committee and still has to be approved by the full common council to take effect.

According to city documents, the four-year project would give no more than $300,000 a year to Bon-Ton through 2018.

Boston Store has been leasing on a year-to-year basis since its lease expired in January 2012 and the store is not profitable, according to city documents.

The location has 750 full-time positions and Bon-Ton would be required to maintain those positions and extend its retail lease through 2018 to receive the funds.

Alderman Murphy said keeping the 750 jobs is worth the investment.

Bon-Ton would receive the money from the Redevelopment Authority of the City of Milwaukee through Tax Incremental District 37.

No borrowing is anticipated and the city expects to recover the money well before the TID's expiration in 2025, according to a city memo.

This amendment would be the third for TID 37 since 1998 to support nearby businesses.

\"We think that message sends a strong incentive to entrepreneurs who may want to open up on one of the vacant storefronts that are currently on Wisconsin Avenue,\" said Rocky Marcoux, Commissioner of Development.

A previous amendment helped pay for the Marriott Hotel adjacent to the Grand Avenue Mall and another paid for the redevelopment of the former Marshall Field's building and upgrades to the Boston Store retail space.