Church at odds with neighbors over cell phone tower 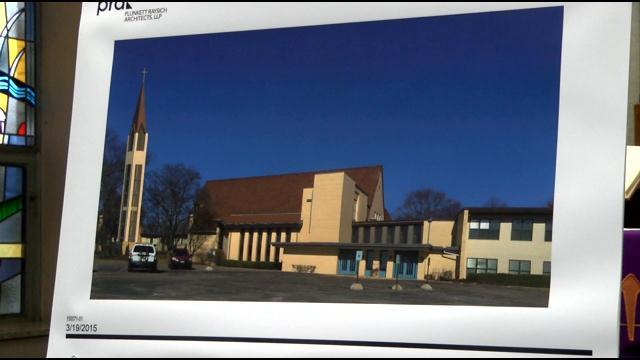 
It's got residents in a quiet neighborhood fuming.

\"The church has been a great neighbor, up until this point,\" said Ellen Kirkegaard.

Ellen and her husband Hans Kirkegaard can see the church from their front yard. They've lived here for 18 years and raised their family here. They say they love their Elm Grove neighborhood.

\"We just want to preserve the neighborhood as it is,\" said Kirkegaard.

So along with other neighbors, they've started a campaign against it, saying the eleven story tower would be better suited a few blocks over on Bluemound Road.

\"We're not happy with the idea of an eleven story tower in a residential area that is one and two story homes,\" said Kirkegaard.

\"Cloaking it in a bell tower?  At 115 feet, you're not going to be able to ignore it,\" said another neighbor, Jan Termuehlen.

Pastor Larry Myers doesn't understand what the fuss is about.

\"We want to be of service to the community. Wireless cellular data transmission is going to be the future,\" he said.

But its also about money. The church would get a monthly stipend

\"Obviously the cell tower is an income stream for the church and that's why they're doing this,\" said Termuehlen.

Meanwhile, Myers says the amount is still under negotiation.

\"Any monies from renting or leasing property in this instance are poured right back into the ministry of the congregation,\" he said.

He says research indicates property values don't decline when a tower is cloaked.

\"Given the wave of the future it could very well be that having a better cell signal would increase the value of a property,\" he said.

But for now, the uncertainty is what neighbors fear. Hans Kirkegaard says there's no definitive research indicating health issues caused by cell towers. This is more about property values.

\"When you go to sell your home and someone says I don't wanna be near that, all the sudden it's not a research based decision that's a real impact,\" said Kirkegaard.

According to local zoning ordinances-the church doesn't need community input before they construct the tower, but they are letting their church members voice their opinion. The church will vote on whether to go forward at a meeting Monday night.
Share this article: