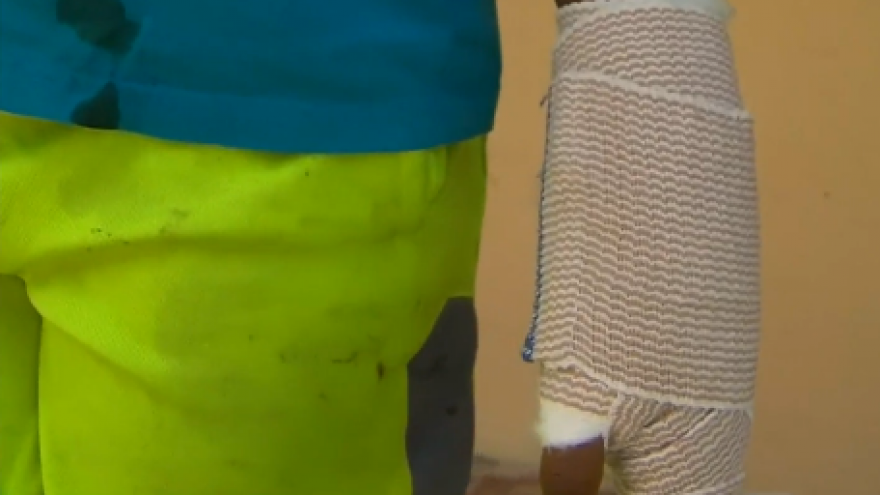 FORT LAUDERDALE (CBSMiami) — A Ft. Lauderdale child is remembering this year’s Fourth of July for all the wrong reasons after a bullet struck him as he watched fireworks.

Despite repeated warnings about shooting guns on the holiday, a stray bullet hit 7-year-old Gabriel Cartwright in front of his Ft. Lauderdale home Tuesday night.

“I think people were shooting guns in the sky and a bullet went in my wrist,” said 7-year-old Gabriel Cartwright.

Gabriel and his two brothers were enjoying the fireworks when he felt something hit his wrist.

“It was hurting really badly,” he admitted bravely.

At first, everyone naturally thought Gabriel had been hit by fireworks. But once in the emergency room, an X-ray showed a bullet lodged in his wrist.

“To see blatantly on an X-ray there’s a bullet in your child, it’s not something I’d wish on anybody,” said his mother, Brianne Staugh, who thinks the gun was fired up in the air. “It was vertical, meaning it was falling. It was in a free-fall. And it fell into his hand. It wasn’t shot at, you shoot something up, it comes back down.”

Overnight, a surgeon removed the bullet and there isn’t expected to be permanent damage for Gabriel.

“Where it was, it didn’t hurt anything, it didn’t hit the bone. It was kind of wedged between the bone and the skin, so it was divine placement because it could have hit him in the eyeball or hit anyone else,” said mom.

Gabriel had a message for everyone listening.

“You shouldn’t use a gun, except for police or professionals who know how to use a gun.”