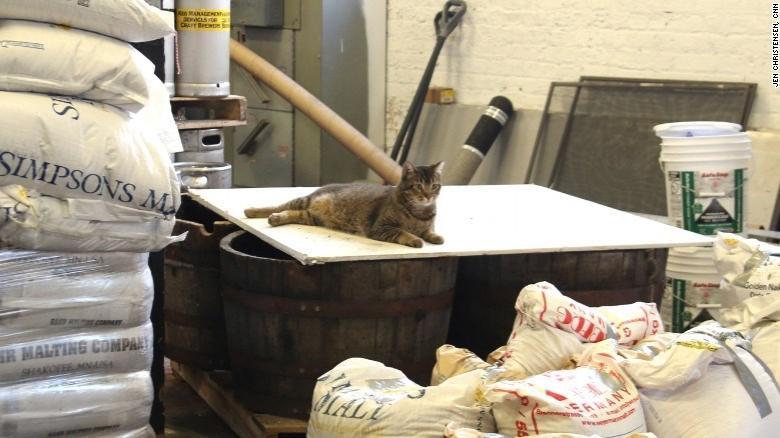 (CNN) Nevin McCown knows he works a job most guys would envy, so as head brewer at Empirical Brewing, he never minded staying late to close up shop -- with one exception.

He'd turn off the equipment in the cavernous warehouse in Chicago's Andersonville neighborhood. He'd be packing up his gear when he'd inevitably look up and realize he had an unwanted guest.

"There'd be this foot-tall rat just sitting there, staring up at you with it's face asking, 'Are you leaving yet? I'm hungry. Can't you just leave already?'" McCown said with a shiver.

"He'd startle us so much we started calling him 'Jesus,' because you'd turn the corner and there he'd be -- 'Oh, Jesus.' "

A 'highly capable sponge for disease'

For a couple of years in a row, pest control giant Orkin playfully named Chicago the "rattiest" city in the country. But it's no joke to residents who've seen far too many.

Rats, in addition to being, well, "icky," are, as anyone who remembers fourth grade history will tell you, disease carriers of the civilization-ending variety.

"Black death" may now be more manageable with modern pharmaceuticals, but rats also carry diseases like antibiotic-resistant E.coli and C.diff. This is scary stuff that's tough to cure if a rat bites you.

Even if you don't get that close, the vermin spread disease through their urine and feces. They also shed a lot and their fur is carried through your ventilation system.

These rat-to-human infections aren't merely a horrific possibility, they are a reality. Dr. Chelsea Himsworth studies the vermin of Vancouver. When she tested rats that came from a particular neighborhood with high rates of human MRSA cases, the rats carried the same MRSA strain.

"Rats are a highly capable sponge for disease," Himsworth said. "They can go into any environment, absorb all of what is dangerous and bring it back to the people."

With climate change and with this century's unprecedented urbanization, you can expect rat problems to grow.

Rat complaints are up in cities all around the country, not just Chicago. Municipalities are trying a wide variety of extermination tactics.

Chicago's war on rats includes a new rodent task force created this April. It added 10 more rat patrol workers. A team of data analysts tries to anticipate where rats may be so city workers can proactively put poison and newspapers in their holes (with no apologies to Chicago Tribune reporters.)

"Folks need to understand how they're feeding these rats," said Chicago Streets and SanitationCommissioner Charles Williams. "Control the food, you control the rats."

Williams is laser focused on dog owners. He believes rats consider dog waste a delicacy. "Dog feces may be the easiest to control," he said.

That was Victoria Thomas' problem. Seven dogs lived in the neighboring building in her tony Lake View neighborhood. The backyard became an all-you-can-eat buffet for rats, causing the vermin to spill over into her own condo's backyard. The many restaurants in the area didn't help either.

At one point, exterminators found 400 rats in her yard.

"I called the city, I mean every day, they knew me by name," Thomas said.

Thomas tried everything: traps, cinnamon rolls laced with poison, trenches. Even chicken wire was no match for the invading rats. She spent about $4,000 trying to control them, but nothing worked. "There were just babies all the time," Thomas said.

Desperate, she put in another call. She skipped City Hall this time and instead dialed the Tree House Humane Society.

Tree House became the country's first cageless, no kill, cat shelter in 1971, but today it may be better known for its innovative approach to rat control.

Most of the animals they rescue are highly adoptable, but some wild cats will never make a good pet. In the past the city's animal control would have to kill those cats. A 2007 ordinance changed that practice. The Managed Care of Feral Cats act allowed animal organizations like Tree House to trap, neuter and return them to their home turf.

Tree House now manages 650 colonies with 3,600 cats. For a select few, even this is not an option, due to threats in their original territory. For them, Tree House came up with an idea.

They put those cats to work.

Cats have worked as the world's fuzzy exterminators for at least 10,000 years. That's when wild cats cozied up to the Natufians, the first human farmers who stored grain, which attracted rodents.

Agile and nocturnal, cats need little light to hunt. With rodents most active at night, cats became their perfect nemesis.

Cats have worked as rat catchers in New York bodegas, Disneyland and ships during World War II. They've even protected the prime minister at number 10 Downing Street, although Larry the cat is described as a terrible mouser.

Even cats you costume for internet videos or holiday cards maintain that hunter instinct.

Knowing this history, Tree House organizers started theCats at Work project five years ago. It transplants these colonies to areas that need their kind of help.

Paul Nickerson, who manages the program, became one of its early customers after construction workers demolished a factory across the alley from his home.

"Hundreds of rats set up shop under decks in our backyard," Nickerson said. "I couldn't even bring my garbage out after sundown, because the rats would just run over your feet."

Nickerson called Tree House, which agreed to give him a colony. His cats have kept his yard rat-free for years.

In Chicago, cats keep the rats out of people's yards, too.

The organization doesn't merely drop the cats off in a new neighborhood. "The cats would honestly have no reason to stay, they don't know the area," said Liz Houtz the Community Cats Program manager. Instead they acclimate the cats, using giant dog crates turned cushy "kitty apartments," with a litter box, scratching post, toys and shelter to protect them from the rain, until they feel at home.

It takes about four weeks for the cats to get used to each other and to their new territory's sounds and smells. The colony's caretaker agrees to feed them twice daily and provide shelter and vet care as necessary.

Cats may eat rats, but they also deter rats from coming near by, as cats mark their territory, not with urine, but by simply rubbing up against things. Even this scent of a cat can make rats scatter.

Neighbors say they haven't seen rats since the cats got to work.

When the cats are put in place, they'll kill off a lot of the rat population, "the other rats will get a whiff of (the cats') pheromones and bug out and leave the area," Nickerson said.

"As far as rodent control goes, it's nearly 100% effective," Houtz said. "It's the only long-term, permanent solution there is."

A three-cat placement costs about $600, but can be negotiable, depending on what people can afford. To Thomas, cats Patch, Fluffy, and Skinnerina are worth every penny.

"I instantly saw the rat holes just, they were vanishing," Thomas said. "I have not seen a rat cross our yard" since the cats have arrived.

Her cats now mostly lounge around as backyard guardians.

"It's been amazing having them here. I feel kind of proud of them," Thomas said.

Even neighbors have sent thanks to Thomas. The cats have caused rats to disappear from their yards, as well.

"I call it cracking 'The Da Vinci Code' of the rat problem," Nickerson said.

Over at Empirical Brewery, Jesus rat has now left the building.

They got four "adorable monsters" about a year and a half ago. The brewery had an online contest to name them, picking names from the original "Ghostbuster"s movie: Egon, Venkman and Raymond. They are the perfect guardians for the grain. Gozer, a tiny female cat, was named after the villain at the end of the movie. Despite her small size, the guys know she'd be a match even for the giant Jesus rat.

"We call her Gozer, the destroyer of hearts, because she's just a cutie pie," McCown said.

Before the brewery got its colony, the rats bit holes into their grain bags. Staff had to toss 200 pounds worth of malt over the year. They haven't lost a grain since the cats came.

Now, cat toys litter the floor and the team has built them a shelter several stories tall nicknamed the Dark Tower, complete with shelves, windows and a door. It's a prominent feature on the brewery tour, with some visitors confessing they came specifically to see the cats.

"They provide us with a lot of comfort and fun during the work days," McCown said. "And they keep my grain safe."

Not everyone loves Cats at Work. Bird supporters complained to the Chicago Tribune's John Kass about the introduction of this "invasive species," claiming the cats are a threat to migratory birds.

Cats are "opportunistic hunters" that tend to go after prey that is easiest first, like what's on the ground, but they do get an occasional bird, according to Nickerson.

Commissioner Williams said "we prefer to eradicate" rats, as opposed to cats whose very presence encourages the rats that they don't kill to move else where, but no one from the city seems likely to stop the program. Alderman have sung the program's praises.

Now there is a 30 day waiting list. Nickerson said people have offered him bribes to move up the list, "but it's not fair," he said.

Nickerson does hope to put more cats to work. He has doubled the number he's placed this year, reaching 160.

Since word has gotten out about the program, people from across the country have called to learn how they can start their own program.

As far as the rats are concerned, no one is protesting on their behalf. "Rats may be the only group people are not protesting (for) in Chicago," Williams joked.

Ultimately, Nickerson said, people should keep in mind that the program has saved cats' lives. Previously, many feral cats were euthanized. These days, hardly any are killed because the cats have somewhere to go.

"It's the cat that are the real winners in this program," Nickerson said.

And many would argue, it's the city that wins, too.