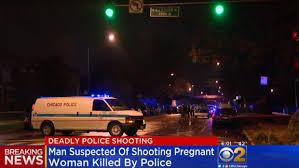 (CBSNews) CHICAGO -- Chicago police say they fatally shot a man suspected of shooting a pregnant woman during a domestic disturbance and two officers were injured during the response.

Police say in a statement officers responded about 11:30 Sunday night to a domestic violence call in the West Garfield Park neighborhood and the man fled. He fired at officers twice before officers returned fire, according to police.

One officer had an injury consistent with a graze wound from a bullet and another officer suffered a leg injury -- not believed to be caused by a bullet -- and reported chest pains, police say.

A 24-year-old pregnant woman was found shot in the abdomen, reports CBS Chicago. She was taken to a hospital and listed in stable condition. The condition of her baby was not immediately available Monday morning.

Police told the station a weapon was recovered at the scene. They say the officer or officers involved will be on routine administrative duties for 30 days.

The incident marked the third fatal police-involved shooting in Chicago in five days, the station reports. On Friday, officers shot and killed 37-year-old Cleotha Mitchell after police witnessed him fatally shoot 35-year-old Jeffery Banks in the Homan Square neighborhood, according to police.

Late Wednesday night, a police sergeant fatally shot 19-year-old Kajuan Raye during a foot chase in the West Englewood neighborhood. The sergeant said Raye pointed a gun at him during the chase, but as of Friday, no weapon had been recovered.

Family has said he was unarmed.

The sergeant has been stripped of his police powers, the station reports, after Police Supt. Eddie Johnson said the department still has “many unanswered questions” about the shooting.

Chicago’s Independent Police Review Agency is investigating all of the shootings.