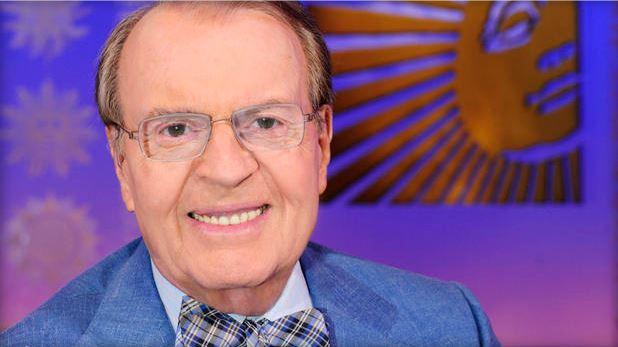 (CBSNews) Charles Osgood announced Sunday his retirement as anchor of CBS’ “Sunday Morning,” ending a 22-year run at the broadcast. Osgood’s award-winning 45-year career at CBS News will be celebrated during his final appearance as anchor on Sept. 25, 2016 on the CBS Television Network.

Osgood will continue as the anchor of “The Osgood File,” his daily news commentaries broadcast on the CBS Radio Network and on stations around the country. He will also make occasional appearances on “Sunday Morning.”

“Some of you may have heard rumors lately that I won’t be hosting these ‘Sunday Morning’ broadcasts very much longer. Well, I’m here to tell you that the rumors are true,” Osgood told viewers during today’s broadcast.  “For years now people -- even friends and family -- have been asking me why I keep doing this considering my age. I am pushing 84. It’s just that it’s been a joy doing it!  Who wouldn’t want to be the one who gets to introduce these terrific storytellers and the producers and writers and others who put this wonderful show together?

“I want to thank all of them, and all you in our still-growing audience, for your support and encouragement,” Osgood continued.  “It’s been a great run, but after nearly 50 years at CBS -- including the last 22 years here on ‘Sunday Morning’ -- the time has come: and a date is set for me to do my farewell ‘Sunday Morning.’”

“Charlie is not just beloved by our viewers.  He’s beloved by all of us who work each week crafting the stories we put on the program,” said Rand Morrison, executive producer of “Sunday Morning.” “Working with him truly has been an honor, a privilege and a joy. We look forward to paying tribute to him and his legendary career in September -- and, of course, seeing him on the radio!”

“Charles Osgood has one of the most distinctive voices in broadcasting, guiding each broadcast, making sure the words were just right, and being a calming, reassuring presence to our viewers,” said David Rhodes, President of CBS News. “His impeccable commitment to quality inspires all of us at CBS News.”

The 90-minute special edition of “Sunday Morning” honoring Osgood will feature a look at the legendary broadcaster’s career, and include surprise guests, interviews, comments from well-wishers and special performances.

Osgood has been the anchor of “Sunday Morning” since 1994, and with CBS News for 45 years. With Osgood as anchor, CBS’ “Sunday Morning” has reached its highest audience levels in nearly three decades, and three times the broadcast has earned the Daytime Emmy as Outstanding Morning Program.

An experienced journalist known as a gifted writer, Osgood has earned many top broadcasting awards, including the Walter Cronkite Excellence in Journalism Award from Arizona State University, the George Foster Peabody Award, and the National Association of Broadcasters Distinguished Service Award.

He joined CBS News in 1971 and has been an anchor and reporter for every broadcast on the network, including the “CBS Morning News,” “CBS Evening News with Dan Rather” and “CBS Sunday Night News.”

Before joining CBS News, Osgood was an anchor and reporter for WCBS News Radio 880 in New York City. Before CBS he worked for ABC News, served as the general manager of WHCT-TV in Hartford, Conn, and was the program director and manager for WGMS Radio in Washington, D.C.

Osgood made his big screen debut as the narrator of Dr. Seuss’ “Horton Hears a Who,” the animated feature film adaptation of the beloved children’s book. He also wrote “A Funny Thing Happened on the Way to the White House” (Hyperion, 2008); “Nothing Could Be Finer Than a Crisis That Is Minor in the Morning” (Holt, Rinehart & Winston, 1979); “There’s Nothing I Wouldn’t Do if You Would Be My POSSLQ” (Holt, Rinehart & Winston, 1981); “Osgood on Speaking: How to Think on Your Feet Without Falling on Your Face” (William Morrow and Company, 1988); “The Osgood Files” (G.P. Putnam’s Sons, 1991); “See You on the Radio” (G.P. Putnam’s Sons, 1999); and “Defending Baltimore Against Enemy Attack” (Hyperion, 2004). Osgood also edited “Funny Letters From Famous People” (Broadway Books, 2003) and “Kilroy Was Here” (Hyperion, 2001).

Osgood was born in New York. He was graduated from Fordham University in 1954 with a B.S. degree in economics. Osgood has performed with the Mormon Tabernacle Choir and played the piano and banjo with the New York Pops and Boston Pops Orchestras.

The Emmy Award-winning “Sunday Morning with Charles Osgood” is broadcast on CBS on Sundays beginning at 9:00 a.m. ET. Executive producer is Rand Morrison.