CBS 58 speaks with the "Greek Freak" 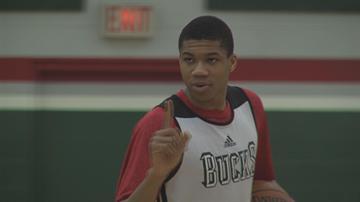 MILWAUKEE- It's been a big year for the Milwaukee Bucks rookie known as the \"Greek Freak.\"

Giannis Antetokounmpo,19, has made an immediate impact on his team and the city.

The NBA's youngest current player is making many local appearances, most notably kicking a goal at the Milwaukee Wave game.

He's recently featured in Sports Illustrated where he tells a story about  once sending so much money home to his family in Greece before a game that he didn't have enough for a cab to the Bradley Center. So, he ran there until a random couple picked him up and drove him the rest of the way.

Antetokounmpo has moved his family to Milwaukee, including his brother Kostas who plays for Dominican in White Fish Bay.

His other brother plays in the NBA D-League.

Giannis said he still tries to take part in his Greek culture, while also adapting to the American customs and traditions.

Antetokounmpo said he likes Thanksgiving, something he spent with his family this year, despite not having celebrated it before.

When CBS 58 was at the Bucks' shoot around, Antetokounmpo was the last to leave the court, hanging around to shoot extra jump shots (Not unusual to Bucks staff).