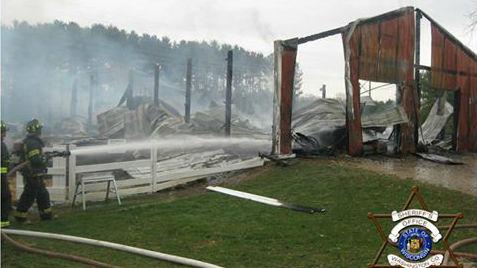 On Wednesday April 20 at approximately 5:08 PM, a neighbor notified the Washington County Sheriff’s Office of a barn fire located at 6340 Arthur Road in the Town of Hartford. Deputies and firefighters from the St. Lawrence Fire Company and Hartford Fire & Rescue Wisconsin were dispatched to the scene, according to a release from the Sheriff's Department.

Six other neighboring fire departments also responded. Upon firefighter arrival, emergency responders observed flames coming out of the top and sides of the barn. The barn was fully engulfed at the time of arrival.

While the fire was brought under control, traffic was shut down on Arthur Road between Highway 83 and Saint Lawrence Lane for approximately two hours.

The home owner was present and tried to get as many animals out of the barn as possible. No firefighters were injured during the extinguishment of the fire. Unfortunately, a cat and two rabbits perished as a result of the blaze. Damage to the barn and contents is estimated at approximately $70,000.

The exact cause of the fire is currently unknown and the incident remains under investigation by Washington County Sheriff’s Fire Investigators.