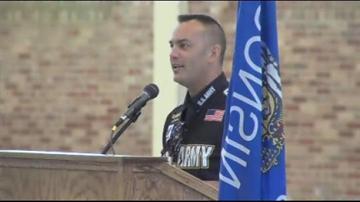 Schumacher attended St. John's as a freshman and sophomore and would go on to train with the U.S. Army.

In a stirring speech he spoke about his hope that many of the cadets listening might one day become engineers and revolutionize the sport he loves.

\"So what we want you to do is drive it. Buckle up,\" Schumacher told the cadets. \"That's how I did it. That's part of my development of the engineering state.And I've been upside down, broken in half and on fire. All the while thinking that didn't work. Part  of the deal man.\"

Each cadet had the opportunity to take a photo and get an autograph with the alum turned role model.

Schumacher brought along one of his race cars along which was on display at the Delafield campus.

Mr. Schumacher attended St. John's Military Academy from 1984 to 1986. He began his racing career in 1992, has earned numerous awards including Driver of the Year and Economaki Champion of Champions, and he has been selected for the American Auto Racing Writers and Broadcasters Association's First Team All-American. Mr. Schumacher is also a seven-time National Hot Rod Association World Champion Top-Fuel Driver.