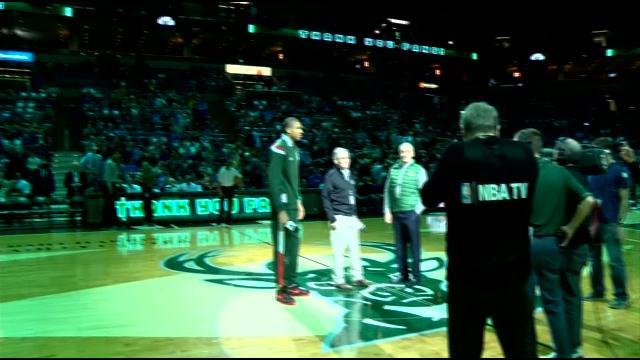 The Bucks have new energy, new logos, and they're ready for the playoffs.

On Wednesday night, the organization thanked the fans for their support.

It was a very warm welcome on fan appreciation night, as the Milwaukee Bucks wrap up their regular season and get ready for the playoffs.

\"Giving us the summer fest tickets, and having the players talk if front of us before the game”, said Bucks fan Chris Wood. “You can tell they genuinely appreciate us as fans.\"

Before tip-off the Bucks owners greeted fans by handing out t-shirts with the team's new logos.

\"We wouldn't be where we are, if it weren't for everyone who comes”, said Mark Lasry. “I think everybody has gotten excited with what's happening with the Bucks.\"

\"I think when you look at the supports that is come out for a team that only 115 games last year”, said Jason Kidd. “I think we're going in the right direction on the floor and off the floor.\"

\"That's one of the biggest turnarounds I've ever seen”, said Bucks fan Matt Marx. Especially out of the box organization.\"

Bucks fans appear to be confident going into the playoffs.

\"I figure where at least a second round playoff team for sure second round”, said Sean Condon.

\"They're going to win it all”, said Bucks fan Zach Allen.

The NBA playoffs begin Saturday April 18th, and the Bucks will play the Chicago Bulls in the first round of the Eastern Conference.