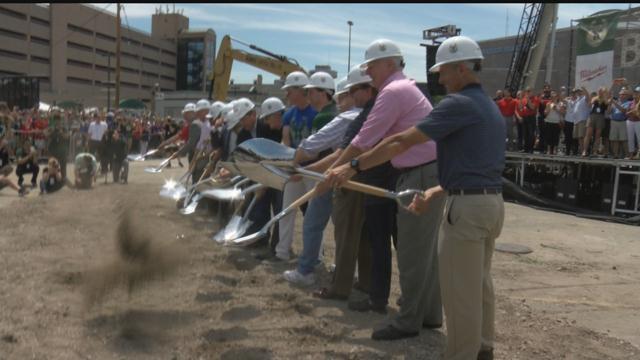 The ground is broken for the new Buck's Arena.

A release from the Bucks states:

The groundbreaking happened during the second annual Buck's Blockparty.

Fans got a chance to put their own mark on the stadium. Permanent markers were passed out, and fans could sign two foundation poles that will be used on the arena.

"I want everyone to stop for a minute look around and remember where you are right now because you'll never see it look like this again," said Wesley Edens, Bucks Co-Owner, before shovels took to the dirt.

Edens says the progress of the arena is at "halftime."

Much of the applause today was dedicated to former Senator Herb Kohl.

"Truly what Senator Kohl did in keeping this team here is something that I believe has never been done in the history of sport. You may never see it happen again. He was a man that decided to (applause) he was a man that decided not to put more money in his pocket, but basically take less money for the team he could have gotten and then invest $100 Million to start this process here," said Edens

In good fun, the former senator has asked for one thing in return.

"He told me he's not getting any younger, and he'd like to see a championship in the next two years," said Edens.

Bucks owners say the arena will be one of the biggest construction sites in the state of Wisconsin.