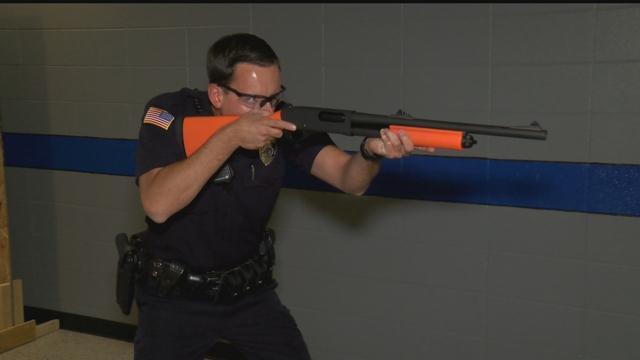 It looks and operates like a 12-gauge shotgun, but instead of bullets, the barrel fires Super Socks or round-shaped bean bags.

They hit the body with the force of a fast-pitch softball.

\"We're aiming for the biggest muscle groups on the body to cause pain and incapacitation,\" said Brown Deer Police Officer Joshua Morgan.

It's called an Impact Munition and is effective from about 60 feet, bridging the gap between a tazer and a gun.

Chief Kass said the weapon could be used for standoffs or dangerous subjects threatening to harm themselves or others. But deploying it must be a team tactic of at least two officers.

Officer Morgan said three is ideal; one will fire the Impact Munition, another will cover others with a gun, and a third officer is needed to make the arrest.

\"The whole point is it gives us a few seconds to go in and take control of that person while their brain is trying to wrap around the intense pain they're feeling,\" he said.

So far, about half of the Brown Deer police force has been trained to use the less lethal weapon. But, officers know it does not replace the ability to use their firearm.

\"You can't play every scenario out because these are very fluid situations,\" said Chief Kass. \"The officers have to have the ability to pick and choose what's going to work best.\"

The less lethal Impact Munitions will be installed in squad cars and deployed Friday. The equipment and training cost the Brown Deer Police Department about $6,000.