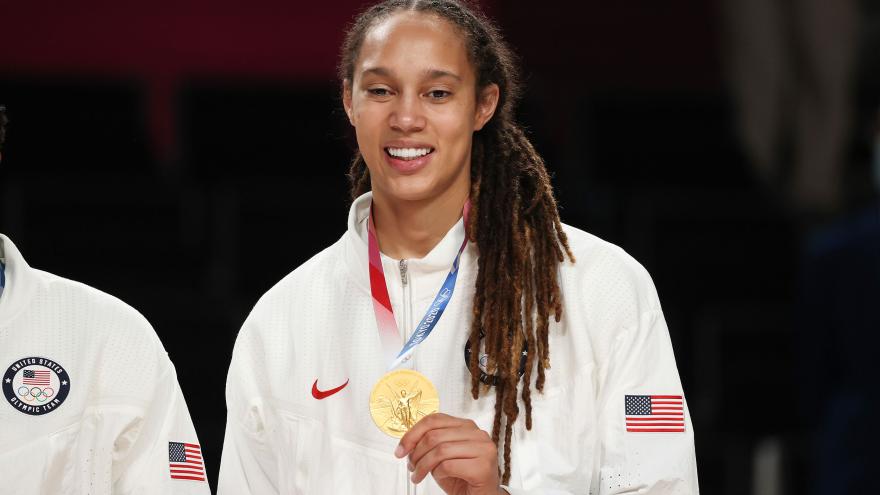 (CNN) -- Cherelle Griner, the wife of detained WNBA star Brittney Griner, has urged President Joe Biden to speak to her and her family.

In an interview with MSNBC, Cherelle said she has "asked" and "requested" to speak to the President but had not heard back amid growing calls for the pair to meet.

"At this point, it almost feels like, you know, they're indirectly telling me 'no,'" she said Wednesday.

"It almost feels like indirectly they've told us as a family they will not meet with us despite the fact that everybody is saying when I do speak to people: 'BG's a top priority. We know she's wrongfully detained. We're doing everything.'

"But the people that have the highest power, they have not spoken to me and my family."

CNN reported Wednesday that, according to a senior State Department official, US Secretary of State Antony Blinken spoke to Cherelle Griner one-on-one on Wednesday.

The official did not provide further details about the call, which came after a State Department error had left the couple unable to speak on their anniversary.

"I have been able to speak with Secretary Blinken inside of the White House," Cherelle added.

"I have been able to speak with some persons from the SPEHA department," referring to the Office of the Special Presidential Envoy for Hostage Affairs.

"However, the person that has the power, you know, the Biden administration itself, being President Biden, Vice President Harris, I have not spoken to them."

Brittney Griner, 31, has been held in Russia since February on accusations of drug smuggling and has been officially classified as "wrongfully detained," a US State Department official told CNN in May.

She will remain in Russian custody through at least July 2, after a Russian court extended her detention, Russian state news agency Tass reported last week.

Cherelle says she hasn't talked to her wife since February 17.

Griner's agent, Lindsay Kagawa Colas, backed calls for the President to meet with the family.

"If #BrittneyGriner is a priority, @POTUS will meet with Brittney's family and this Administration will do what is necessary to get her home swiftly and safely," Kagawa Colas tweeted Tuesday.

"Each day is precious and not another should go by without the action required to bring BG home."

A State Department spokesperson recently told CNN that the department has "no higher priority than the safety and security of U.S. citizens overseas."

"We remain in regular contact with the families of those held hostage or wrongfully detained; we are grateful for their partnership and feedback; and we continue to work to ensure we are communicating and sharing information in a way useful to our families," the spokesperson said.

It comes as Brittney was named an honorary WNBA All-Star game starter this week.

"During each season of Brittney's career in which there has been an All-Star Game, she has been selected as an All-Star," league commissioner Kathy Englebert announced in a statement Wednesday.

"It is not difficult to imagine that if BG were here with us this season, she would once again be selected and would, no doubt, show off her incredible talents. So, it is only fitting that she be named as an honorary starter today and we continue to work on her safe return to the US."

The 2022 WNBA All-Star game is scheduled to take place on July 10 in Chicago.