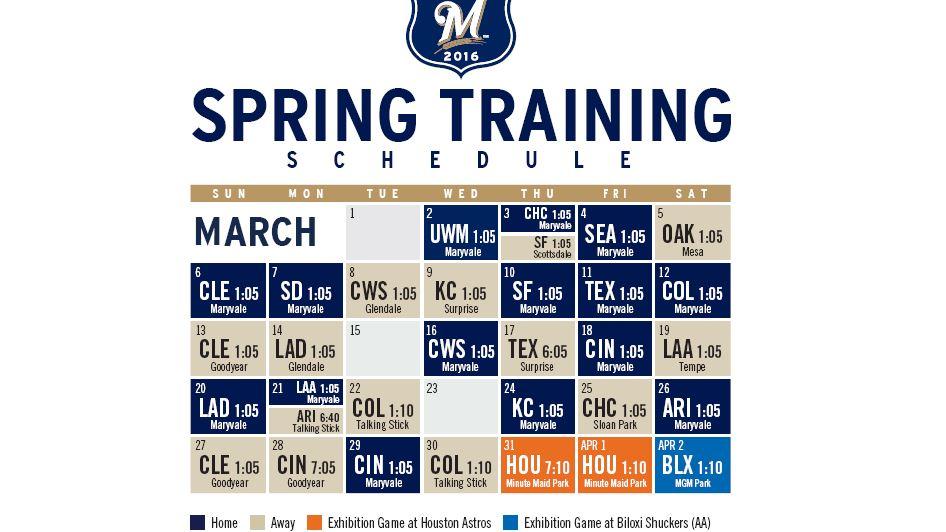 The Milwaukee Brewers announced the team’s 2016 Spring Training schedule today, which begins on Wednesday, March 2, against the University of Wisconsin-Milwaukee baseball team. This marks the second consecutive year that the Brewers will open their spring schedule vs. UWM.

The majority of the spring games will begin at 1:05 PM Arizona time. The Brewers will play three night games in Arizona, including a 6:05 PM (local time) start on St. Patrick’s Day against the Texas Rangers at Surprise Stadium on Thursday, March 17. Milwaukee will play an evening game on Monday, March 21, against the Arizona Diamondbacks at Talking Stick (6:40 PM local time) as part of the team’s second split-squad date (the Brewers will host the LA Angels of Anaheim earlier that day). The third night game will take place on Monday, March 28 against the Cincinnati Reds at Goodyear Ballpark (7:05 PM local time). The Brewers will also play an evening game against the Houston Astros on Thursday, March 31 at Minute Maid Park, beginning at 7:10 CT.

Tickets for the Milwaukee Brewers’ home Spring Training games will go on sale at 9 AM CT on Monday, December 7 at Brewers.com and by phone at 1-800-933-7890. Sales at the Maryvale Baseball Park Box Office will begin on Monday, February 8. Tickets are available in five seating areas: Diamond Box ($27), Field Box ($24), Infield Reserved ($18), Outfield Reserved ($14) and Lawn Seating ($8). In addition, there will also be a limited number of advanced parking passes available for $5. Information on Spring Training Season Tickets can be obtained by calling the Milwaukee Brewers Ticket Office at 414-902-4000.