Brave local advocate for those with Muscular Dystrophy, Mike Neufeldt, passes away at 37 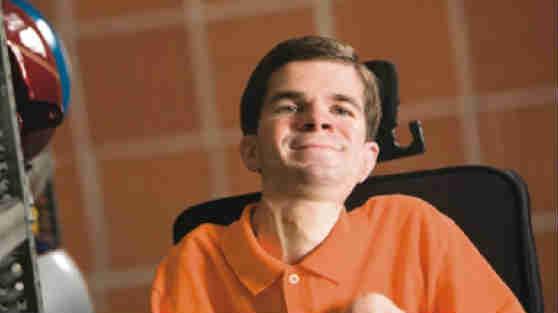 The New Berlin man was diagnosed with Emery-Dreifuss muscular dystrophy as a child.

His parents recalled often how they were told he would not live beyond his teen years.

Michael not only survived but thrived.

At the time of his death due to breathing problems and heart trouble, he was working in online programs and operations at Harley-Davidson Motor Company.

The 2000 graduate of Marquette University majored in broadcast and electronic communications.

They were skills that served him well for years as host of the annual MDA Telethon on CBS 58.

He had been in the spotlight early in life and charmed comedian Jerry Lewis when they worked together to raise money to fund research to fight neuromuscular disease.

Neufeldt was a Burke Scholar, receiving full tuition, room and board, and expenses for four years in recognition of his academic achievements and community service.

Neufeldt was a coordinator with the Marquette University Community Action Program, and he worked at MU-TV, the campus television station.

He was a member of Kappa Tau Alpha, the national journalism honor society, and Alpha Sigma Nu, the Jesuit honor society.

Neufeldt was the recipient of the 2008 Robert Ross MDA National Personal Achievement Award.

In the spring of 2006, Marquette University awarded Neufeldt The James T. Tiedge Memorial Award. It is awarded to former students of broadcast and electronic communication for professional excellence consistent with the values of ethical behavior and responsibility taught and lived by James Tiedge.

Neufeldt co-authored a book on Marquette University basketball titled Tales from the Marquette Hardwood. It chronicles the history of Marquette basketball from Al McGuire's 1977 national championship team to present. The book was released in December 2005.