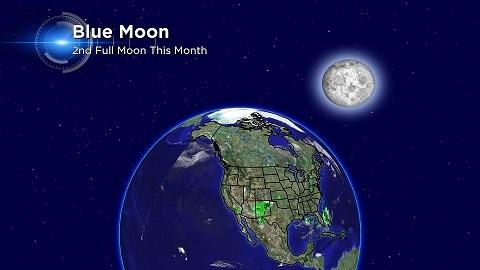 Back on the first day of July we had clear skies and a nice view of the first of two full moons this month.  This first full moon is also known as the \"Buck Moon\".  It's meant to signify the emerging antlers on buck deer's foreheads common this time of year.

Our second full moon rises Friday night at 8:15 P.M. Milwaukee time and doesn't set until just after sunrise at 7:10 A.M.  As a special treat, Friday's moon is also at its closest approach to earth this month at just a little over 227,000 miles.

Of course every month has a full moon, but on rare occasions, about every two to threes years, we have two full moons within the same calendar month. This happens because the lunar cycle and the calendar year aren't perfectly synched.  This second full moon is called a \"Blue Moon\" and helped coin the phrase, \"Once in a blue moon.\"

The last blue moon occurred in August 2012 and our next blue moon doesn't rise until January 2018.