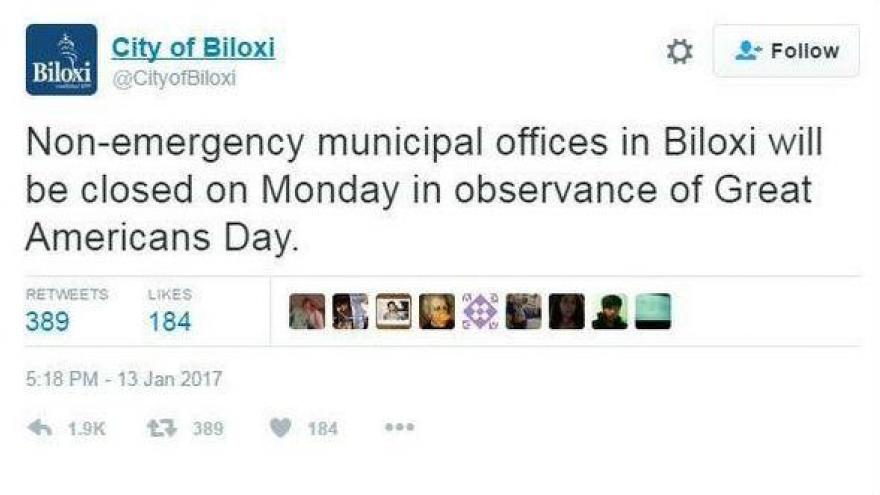 (CBSNews) BILOXI, Miss. -- There’s a lot in a name, the city of Biloxi in southern Mississippi is learning after facing social media backlash for posting online about closures for “Great Americans Day” on Monday, which is federal holiday honoring civil rights hero Martin Luther King, Jr.

It started with  just before 7 p.m., when the city of Biloxi posted on Facebook and Twitter the list of closures for Great Americans Day, but didn’t reference Martin Luther King, Jr. Day, CBS affiliate WLOX reports.

Non-emergency municipal offices in Biloxi will be closed on Monday in observance of Great Americans Day.

Biloxi’s website notes MLK Day, but says “non-emergency municipal offices in Biloxi will be closed Monday in observance of “Great Americans Day,” the official city name for the holiday. All offices will re-open Tuesday at their appointed times.” The website also has a post that was published Friday night says “MLK Day takes center stage this weekend.”

The city of about 44,000 wracked up thousands of comments and shares Friday night. The city responded to some of the comments on Facebook and tweeted that it is a state holiday.

Representatives for the city of Biloxi declined to comment to WLOX, only saying the name change was part of state legislature.

“We definitely want to remove any doubt that that piece of paper or that term or official name. We can correct that,” Gilich told WLOX Friday night. “My direction to the folks who handle those responsibilities, as far as I’m concerned, it is Martin Luther King. If we have to do something to match the designation by the federal government of the holiday, then we will.”

Only three states combine the celebration of King and Lee’s birthdays; Mississippi, Alabama, and Arkansas, according to WLOX.

“If there’s a perception of racism with not honoring the federal holiday and controversy over the name, the council would be willing to revisit and revise the 1985 ordinance,” Gilich told WLOX.