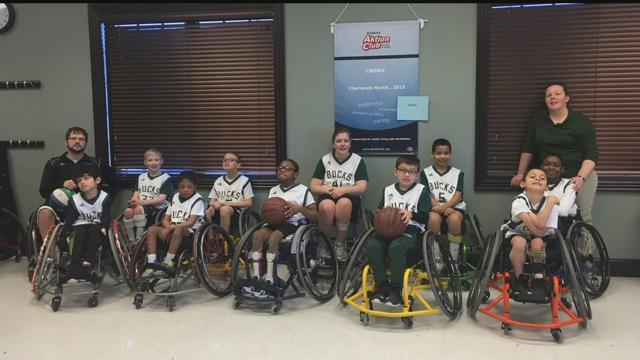 The Big Cheese Classic Wheelchair Basketball Competition was started by a local mom for her daughter.

Now in only its second year, it has grown significantly.

"We have teams coming in from all over the Midwest," said Damian Buchman, Executive Director of the WASA or Wisconsin Adaptive Sports Association. "This is a great opportunity for kids and athletes. Their family and classmates  cheer them on. This is there only opportunity for the public to see them. What we call seeing the game in a different pair of shoes."

Student athlete  Travis Beckler used to play baseball, but likes basketball a lot more for its quick pace and competitiveness.

The Bucks have come on board as major sponsor of five teams of men, women, kids and prep juniors.

There will be  four divisions including children’s 8’ Junior Prep (ages 8-14) and 10’ Junior Varsity (ages 14-21) as well as adult’s Division 3 and Championship Division.

22 competitive co-ed teams from 4 states (Illinois, Michigan, Minnesota and Wisconsin) are competing in the two day tournament. Brookfield East High School is an accessible venue that welcomes the tournament and its athletes who use wheelchairs.

The NWBA frequently has their most-competitive youth athletes go on to compete as adults in Paralympic Games (held just after the Olympic Games in the same sports venues).

Championship games will be held at 2.