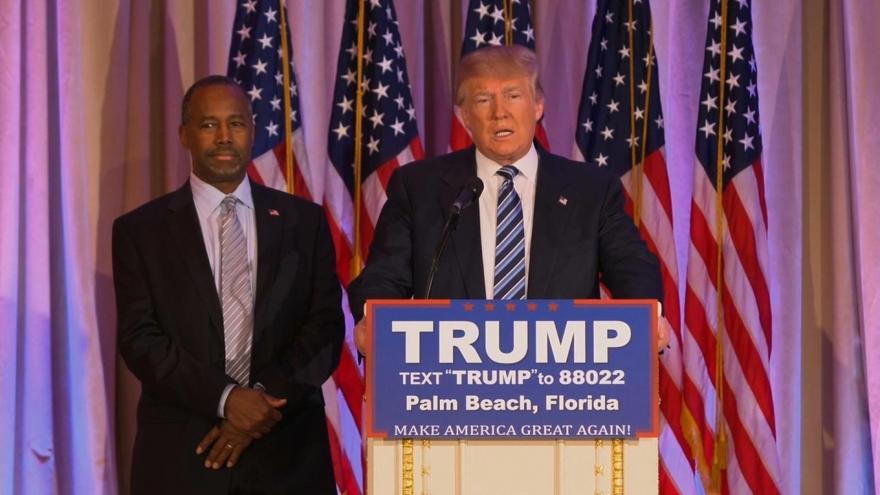 "He's actually a very intelligent man who cares deeply about America," Carson said at a press conference at the Mar-a-Lago club in Palm Beach, Florida. "There's two different Donald Trumps. There's the one you see on stage and the one that's very cerebral, sits there and considers things very carefully."

The endorsement is the second former presidential candidate to give his official backing to Trump -- after New Jersey Gov. Chris Christie -- and comes before several crucial primaries next Tuesday, as the real estate mogul hopes to unify support behind his presidential bid that has divided the Republican party.

Carson, who said he prayed over his decision, told reporters that he and Trump had reconciled after having several spats while both were presidential candidates.

"We buried the hatchet," the retired neurosurgeon said. "We moved on because it's not about me. It's not about Mr. Trump. This is about America."

Carson also used the opportunity to call on the Republican Party --- as Trump has been doing in recent days --- to unify around whoever the leading candidate and "let the political process to play out."

"What I've been seeing recently is political operatives... once again trying to assert themselves and trying to thwart the will of the people," Carson said. "I find that to be an extraordinarily dangerous place right now."

News of the endorsement broke Thursday, and the real estate mogul confirmed Carson's support during a GOP debate hosted by CNN.

"Having his support, really, it just adds total credence to what I'm trying to do and to what we're all trying to do," Trump said at the news conference, introducing Carson.