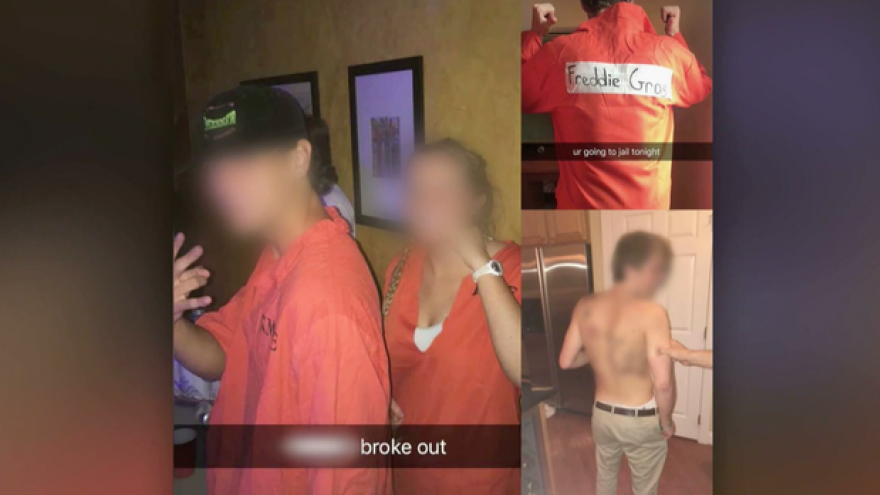 Two white students appear to be dressed as inmates in one image. The caption uses the n-word and says they "broke out" of jail.

Another image shows a white person dressed as an inmate. The name on the back of his jumpsuit reads "Freddie Gray." The photo caption says "ur going to jail tonight."

Gray, a 25-year-old black man, died in police custody in 2015 when his neck was severed inside a police van. His death sparked protests and riots in Baltimore.

The final image shows a white man without a shirt on who has a racial epithet and swastikas drawn on his back.

Current and former students from as many as five private schools in the Baltimore area could be involved in the incident.

CBS Baltimore has learned that two students are juniors at Roland Park Country School and Gilman School. The person in the Freddie Gray jumpsuit is a former Boys' Latin School student, and the boy without a shirt is a student at St. Paul's School.

The person who gathered the photos and posted them on Facebook claims the original posters of the photos go to Mount Saint Joseph High School.

"Know that we take any situation involving our students seriously, and this is no exception," representatives from Gilman School and Roland Park Country School wrote in a joint statement Monday. "Please understand that many involved in this situation are minors and we respectfully remind you of this as we work through the details."

Officials at St. Paul's said the school "does not tolerate any form of hate or discrimination" and that they are investigating the off-campus incident. "We remain committed to fostering an inclusive community whose members respect themselves and one another," the school said in a statement.

CBS Baltimore reached out to Boys' Latin School for a statement but has yet to hear back.

"It's like, really good that we have these conversations because it lets us learn," student Yemisi Ojolayo told CBS Baltimore. "My teacher, she was going off about how racism is taught and how they are influenced by social media and their parents and many other people."