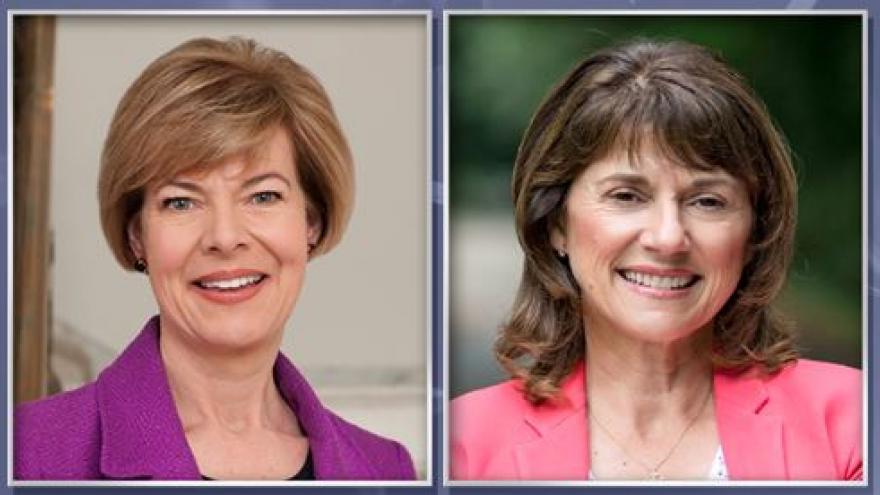 They also drew contrasts on some familiar themes , including health care, taxes, and immigration.

Here are highlights of some of the key issues from the debate hosted by the Marquette University Law School:

Baldwin said the U.S. should impose sanctions on Saudi Arabia and Vukmir agreed but added that she trusts President Donald Trump to make a decision once he "has all the information."

Both candidates were asked whether the midterm elections are a referendum on Trump, who will be in Wisconsin Wednesday campaigning for Vukmir.

"Another one of the promises that he followed through on," said Vukmir, who has not been shy about her support for the president.

Baldwin said the Nov. 6 elections were not about Trump.

They disagreed on the benefits of the Republican tax plan, with Baldwin saying it mostly benefits the wealthy and Vukmir saying it's helping working families — positions they have both staked before.

But this was their first chance to respond to Senate Majority Leader Mitch McConnell's comment this week that entitlement spending is contributing to the rising federal deficit, not the GOP's tax law.

Democrats have warned Republicans will pay for their tax plan by gutting entitlement programs. Baldwin said there must be a balanced approach to address the deficit and took aim at the Republican tax law.

Vukmir said there need to be spending caps and insisted that Republicans don't want to touch Social Security, although she did not address Medicaid or Medicare.

"The president has said very specifically that he does not support Social Security reform. I'm standing with the president on that," Vukmir said.

It is a major issue in the campaign, and many other contests across the country. Baldwin supports the Affordable Care Act, is a co-signer of Vermont Sen. Bernie Sanders' "Medicare-for-all" proposal and backs universal health care.

Vukmir, a nurse, wants to repeal the Affordable Care Act, while also arguing that she supports a component of the ACA guaranteeing insurance coverage for people with pre-existing conditions.

"I have said over and over again I would fall in front of a truck before I would let people go without coverage for pre-existing conditions," Vukmir said.

But Baldwin said if Vukmir is elected and casts a vote in favor of repealing the ACA, it would lead to people with pre-existing conditions losing coverage.

"Leah Vukmir's idea ... is to move backwards, to the bad old days," she said.

Baldwin has said she favors comprehensive immigration reform, while Vukmir sides with Trump's proposal to build a wall along the Mexico border before anything else.

The candidates were asked about Secretary of State Mike Pompeo's comments Friday that the U.S. is reaching "a moment of crisis" at the border because of the number of people coming into the country.

Vukmir said "what's happening now at the border is chaos," and accused Baldwin of wanting open borders, which drew a rebuke from the senator.

"That's nonsense and Leah is clearly lying again," Baldwin said. She said when she first took office in the Senate in 2013, she supported a bipartisan immigration bill that dealt with border security, putting 20,000 new agents at the border and creating a pathway to citizenship for young immigrants, popularly known as "Dreamers."