Badgers fans in Indy counting down to championship game 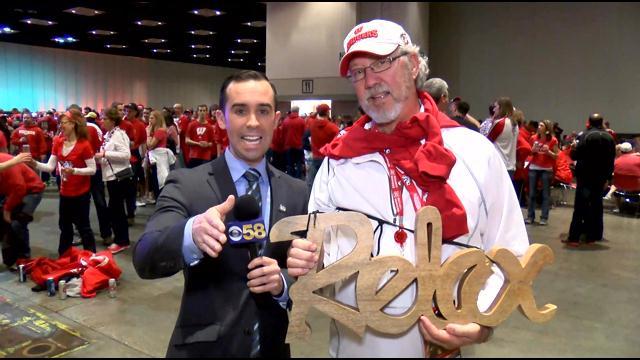 Badger fans have flocked to Indianapolis to watch the Badgers face off against the Blue Devils.

Fans got pumped for the big game while attending the Badgers pep rally in Indianapolis.

CBS 58 Anchor Bill Walsh is anchoring live team coverage Monday night. He says just by the looks of things on the streets of Indianapolis, Badgers fans in all their red outnumber Duke fans in blue 10-1.

1941 was the last time the UW Men's Basketball team took home a championship  against Washington State.

CBS 58's John Cuoco ran into one fan who was carrying a relax sign. A phrase coined during football season by Packers QB Aaron Rodgers.

\"I'm carrying it around to remind myself,\" said the man who admitted to being nervous and excited, but confident the Badgers would win. \"It's our time.\"

Here is the Monday night lineup on CBS 58 Milwaukee

After the game special extended coverage with game reaction from Madison and Indy on CBS 58 News
Share this article: