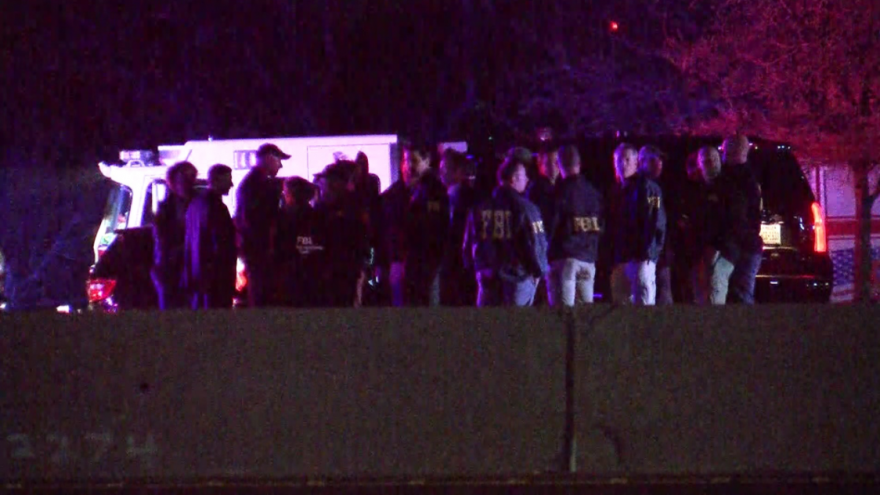 Police Chief Brian Manley said early Wednesday that the suspect set off an explosive device in his vehicle as SWAT team members were closing in. He says one of the SWAT officers also shot at the vehicle.

Manley identified the suspect only as a 24-year-old white male. He says the suspect's name won't be released until his next of kin are notified.

Austin has been targeted by four package bombings since March 2 that killed two people and wounded four others. A fifth parcel bomb detonated at a FedEx distribution center near San Antonio early Tuesday.

AUSTIN, Texas (CBSNews) -- Law enforcement -- including federal agents from the FBI and ATF -- flooded a normally quiet neighborhood in southwest Austin overnight, after an explosion injured two people. Police believe a bomb left on the side of the road exploded, injuring two people.

According to a first responder, one of the victims had a nail in his wound, reports correspondent Omar Villafranca.

Police say the two men injured in last night's explosion were with their bikes when the bomb went off. "It is very possible that this device was a device that was activated by someone either handling, kicking, or coming in contact with a tripwire that activated the device," said Austin Interim Police Chief Brian Manley.

The two victims are hospitalized in good condition.

Police have ordered everyone within about a half-mile of the explosion to stay inside their homes.

The blast follows a trio of package bombs that killed two and injured two others this month. Police are working under the belief that last night's explosion is connected.

Police were continuing to examine the blast site Monday morning, and combing through the neighborhood to make sure there are no other threats.

Chief Manley said investigators were checking a backpack found near the scene of the blast, and warned people to stay away from anything suspicious.

"We now need the community to have an extra level of vigilance and pay attention to any suspicious device, whether it be a package, a bag, [or] a backpack," he said.

CBS affiliate KEYE-TV reported that the incident happened in the 4800 block of Dawn Song Drive, near Mopac and 290, around 8:45 p.m. Sunday.

Police say they are waiting until daylight to confirm this neighborhood is safe and are asking people to stay in their homes until at least 10 a.m.

Earlier this month, three package bombs were left on porches in East Austin. All three exploded, killing two people and severely injuring two others. All of the victims were black or Hispanic.

Assisting Austin police are more than 500 federal officials. By Sunday afternoon, 735 suspicious packages were reported, 435 leads were called in, and 236 people had been interviewed.

Manley believes the previous explosives were meant to send a message.

AUSTIN, Texas (CBSNews) -- Austin police have confirmed that there was an explosion Sunday at a house in southwest Austin. Authorities said two people were injured. There has been no immediate word on the cause of the explosion or whether it was linked to other explosions that have rattled nerves in Texas' capital.

Officials gave residents a safety message during a late Sunday night news conference urging them to not touch any packages that might appear on their doorstep and to notify police if anything looks suspicious.

Early Monday, police widened their safety alert, saying the latest device may have been set off by a tripwire, so they urged people to stay away from any suspicious devices, backpacks, etc., not just packages. Police said they were working under the assumption the latest blast was linked to the earlier ones -- and was a bomb. They urged people to stay in their homes until at least 10 a.m. to give them time to search for any other possible devices.

CBS affiliate KEYE-TV reported that the incident happened in the 4800 block of Dawn Song Drive near Mopac and 290 around 8:45 p.m. Sunday.

Austin police Chief Brian Manley said investigators will keep the surrounding area closed at least until daybreak as evidence is collected. He also mentioned police received a separate report of a suspicious backpack in the area and are still working to "clear" that.

Austin police wrote earlier that they responded to a so-called "bomb hot spot" call on Dawn Song Drive. Two males were rushed to a hospital with injuries that were not considered to be life-threatening.

The two males were sent to St. David's South Austin Medical Center and a spokesperson said they are in good condition.

The FBI and ATF are on the scene investigating.

Police are currently investigating three explosions that occurred this month and said that they could be crimes of hatred. One package bomb exploded at an east Austin home March 2, killing a 39-year-old man. Two package bombs in other parts of the city exploded March 12, killing a 17-year-old, wounding his mother and injuring a 75-year-old woman.

Officials have upped the reward to $115,000 for information that leads to an arrest for the prior package explosions. Manley said investigators have not ruled out any possible motive or have an indication "what the ideology is behind this."

There is no word yet if this recent incident is connected, CBS affiliate KEYE-TV reports.