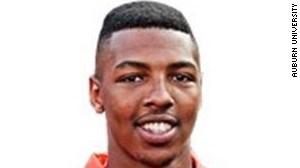 The 18-year-old was a freshman football player, according to news website AL.com.

No suspect is in custody, and police are investigating.

Mitchell had signed with Auburn this year but sat the season out to gain weight and train for next year, AL.com reported. He had played high school football in nearby Opelika.

He was a good receiver and runner, according to the Auburn Tigers' website.

\"He's a fantastic athlete that is going to be able to do a lot for us,\" Coach Scott Fountain told the Tigers' website after Mitchell signed on.

\"The thoughts and prayers of all of us at Auburn University are with his family during this difficult time,\" he said.