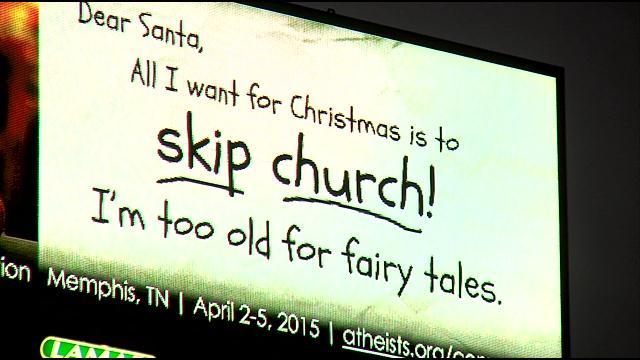 A billboard that suggests church is a \"fairy tale\" has people talking, which is exactly what the group that paid for the billboard wants.

You can see the billboard on I-94 westbound between the Marquette interchange and Miller Park. It shows a little girl making out a Christmas wish list. The copy next to her picture says \"Dear Santa, all I want for Christmas is to skip church. I'm too old for fairy tales.\"

When we pointed out the ad to Edna Givens, she was not happy with its message. \"Got something telling people not to worship, that's a bad thing,\" Givens said, \"If I had any authority, I would make them take it down.\"

The ad was paid for by Southeast Wisconsin Free Thinkers, or SWiFT. Rob Moore says he wants to get people talking. And like it or not, atheism in America is growing. \"We're 16 to 20-percent of the population... there is a community, you don't have to feel like you need to stay in the closet,\" Moore said.

We reached out to the Archdiocese of Milwaukee for a response, they emailed back a statement:

\"Thankfully, we live in a society that protects freedom of expression where any person can say what they want. Our prayer would be that parents continue to provide a way for their children to know the one for whom we celebrate this season of love-Christ Our Lord.\"

Moore says Milwaukee is one of five cities where the ad is running. He says the ad was turned down by two other local companies. It will run through the end of this week.