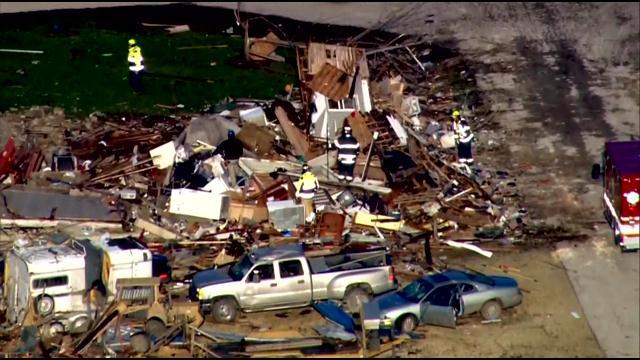 It has been a few days since severe weather struck the Midwest on April 9th and now we know a little bit more meteorologically about what happened. As we expected a warm front would be the focus of the severe weather. After slowly moving northward, this warm front stalled just south of the Wisconsin/Illinois border.

Because the front stopped moving just to our south, it spared southern Wisconsin from the worst storms. This image from the National Weather Service in Chicago shows thunderstorm rotation as indicated by radar. There is plenty of rotation in northern Illinois, but as soon as the storms reached the border (where the front stalled) they lost their rotation. This rotation was also to blame for a tornado warning that was issued Thursday evening for Walworth County.

Even though we didn't see any tornadoes in southern Wisconsin, we did pick up numerous hail reports. Most of the hail reported was small; the size of peas and pennies. But a few reports, mainly near Lake Geneva did see hail the size of quarters which satisfies the criteria for a severe thunderstorm.

Besides, hail and frequent lightning these storms were big rain makers. Combining a round of storms that moved through southern Wisconsin early Thursday and the strong storms that moved through Thursday night, Mitchell International Airport picked up almost 3.50\" of rain. That amount of rain is nearly equal to the amount Milwaukee usually picks up through the entire month of April!

Since so much rain fell in a short amount of time rivers around our area were bound to rise. As a result, flood warnings were issued for Ozaukee, Mitchell and Racine counties. Luckily, this was our first significant rainfall event of the season and rivers receded just as quickly as they rose allowing flood warnings to expire Saturday morning.

Even though southern Wisconsin was spared the worst of the storm, our neighbors to the south were not so lucky. Two people died from an EF-4 tornado that ripped through Rochelle and Fairdale, IL with winds as high as 200 mph.