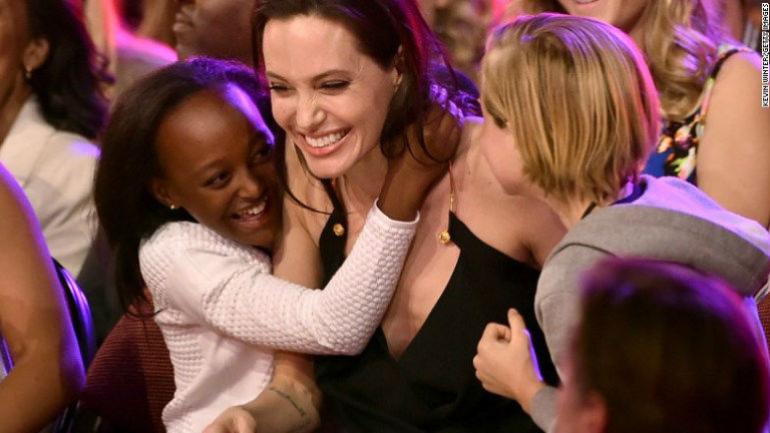 (CNN) -- Angelina Jolie took the stage Saturday at Nickelodeon's 28th Annual Kids' Choice Awards and delivered a message of hope to anyone who's ever felt out of place.

In her first public appearance since revealing that she underwent a second preventative surgery to lower her risk of cancer, Jolie attended the show with her children, Shiloh and Zahara.

She hugged them before she went to the stage to accept the favorite villain award for her role as Maleficent in the live-action reimagining of \"Sleeping Beauty.\"

\"When I was little, like Maleficent, I was told that I was different. And I felt out of place -- too loud, too full of fire, never good at sitting still, never good at fitting in,\" the 39-year-old actor and humanitarian said.

\"And, then one day I realized something, something that I hope you all realize: Different is good,\" she said, prompting enthusiastic screams from the young crowd.

\"And, as your villain, I would also say cause a little trouble -- it's good for you.\"

Jolie's career has been full of unconventional twists and turns, from her breakthrough role as a drug-addicted model in \"Gia\" to her current role as an actor, filmmaker and special envoy of the U.N.'s High Commissioner for Refugees.

Her personal life also has made front page headlines over the years, from her decision to adopt orphans from developing countries to her openness with her health.

Jolie, 39, wrote Tuesday in a New York Times essay that she had opted for the surgery after blood tests revealed markers that might have been an indication of early cancer.

Two years ago, she underwent a double mastectomy for similar reasons. Jolie's mother died of ovarian cancer, and the actress has a gene mutation that makes her chances of developing breast cancer and ovarian cancer much higher than the overall population.

Jolie's revelation provoked an outpouring of support as the news spread across social media.

\"It is not easy to make these decisions. But it is possible to take control and tackle head-on any health issue. You can seek advice, learn about the options and make choices that are right for you. Knowledge is power,\" she wrote.