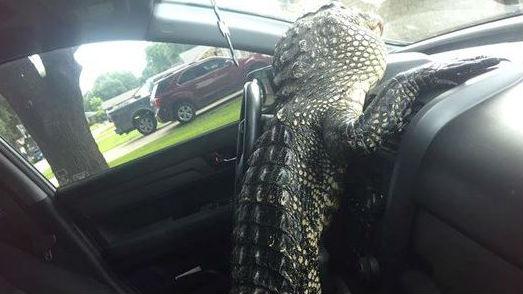 (CBSNews) HOUSTON -- An alligator in Texas tried to make a daring escape after it was captured Sunday by climbing out of the trunk of a car, CBS affiliate KHOU reported.

Thankfully, Kolbroth was not in the vehicle at the time.

She wrestled with the aggressive gator before coaxing it out of the vehicle. The gator is apparently blind in its right eye and had bullet wounds in his back.

"Someone was mean to this gator, even though he beat up my car, we're still going to try to be sweet to him. It's not his fault he saw the light from the windshield and just tried to get out..." said Kroboth in the video.

Kroboth also mentioned the gator was rather skinny for a 7-foot male.

The gator will be taken to the Gator Farm later in the day on Sunday, KHOU reported.