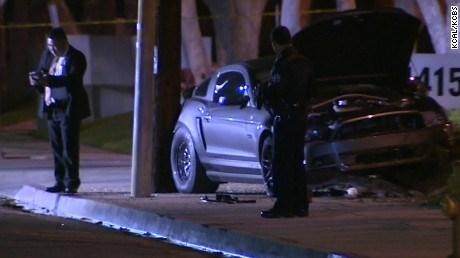 (CNN) A man suspected of killing two people during a \"street race\" has turned himself in to Los Angeles Police.

The crash happened Thursday in the San Fernando Valley neighborhood of Chatsworth.

Gevorgyan was driving a gray Ford Mustang and was allegedly racing another vehicle \"and struck several pedestrian spectators,\" police said.

Authorities said he fled the scene of the accident along with the driver of the other car.

One man died at the scene, another died at a local hospital from his injuries. A third pedestrian is hospitalized in stable condition.

\"Many view this as an entertainment, glamorous activity. I think it's important for the public to know that this is illegal, dangerous and an all too deadly activity,\" Capt. John McMahon told CNN affiliate KCAL/KCBS.

Video from the scene showed the smashed Mustang on a sidewalk. The car reportedly spun 180 degrees before landing between a fire hydrant and a utility pole.

The driver of the other vehicle involved in the crash has not been found.