All Hall of Famers are Not Created Equal; Some Take More Time to Develop 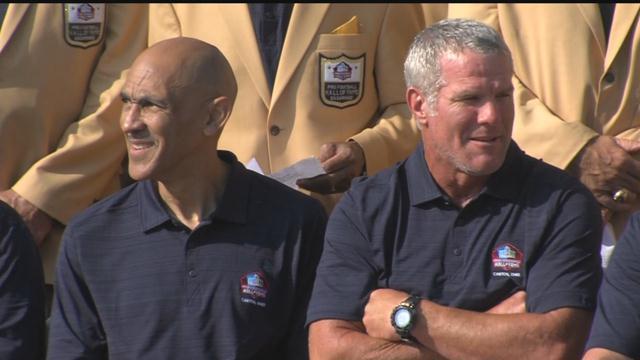 Brett Favre wore Green Bay Packers green and gold for 16 seasons and today, on the eve of his induction into the pro Football Hall of Fame, Brett Favre has a signature gold jacket in his wardrobe.

He was there for last night's prestigious gold jacket ceremony.

Brett Favre's youth football coach, Rocky Gaudin, readily admits he had no idea Favre would become one of football's all time greats when Gaudin watched Favre on the fields of south Mississippi. Rocky wasn't alone. Recruiters from every major school in the football-rich South looked past Favre when searching for the next big talent.

Part of that issue stemmed from Brett's own father. Irvin Favre was a legend in Kiln, Mississippi, and his boys were all quarterbacks. Except Irv's teams didn't throw the ball. Almost ever. College coaches who came to see Brett's arm were told to watch him throw in warmups. One legendary story circulates that Brett threw five passes one game, and when college coaches expressed their disappointment, Irv promised to throw more the next week.

Brett eventually chose to stay close to home and go to Southern Miss - to play defensive back. That didn't last long, once the USM staff saw Favre air it out in practice. So Brett Lorenzo Favre made a switch that would transform him into a legend.

His first game under center at Southern Miss is a part of football lore in that state. The Golden Eagles offense sputtered for the entire first half, and the coaches told Favre he was going in after halftime. And so Brett went out to the sidelines, grabbed a football... And started practicing punts! The message on Favre's role was communicated a bit more clearly the second time, and Favre started warming up his right arm instead of his right leg. He also threw up on the sideline (Favre and a teammate had been up late the night before, assuming they wouldn't play that day).

Favre's first pass is still talked about in Mississippi. It wasn't even a completion. The powerful right arm of the young, energized Favre overthrew his receiver by 15 yards. And the fans at Southern Miss stood up and cheered. A standing ovation for an incompletion. Finally, The University of Southern Mississippi would be throwing the football!

Favre threw a few more deep passes over the next three seasons in Hattiesburg.

Stay tuned to CBS 58 for coverage of Favre's induction into the Pro Football Hall of Fame this weekend.