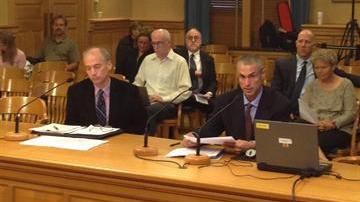 Wade didn't hold back as he lectured the man trying to start a Milwaukee Marathon.

Wade repeatedly said he was insulted by the marathon route and that the race organization ignored the African-American community.

Wade went on to say he supports the race in itself but wants African-Americans to have input.

Wind Lake resident Chris Ponteri is the organizer.  He said he plans to include more people going forward. He said he reached out to Wade's office but didn't hear back. He also said he previously met with alderwoman Milele Coggs and former common council president willie Hines.

Ponteri hopes to get permit approvals for the race soon.

Even though today's meeting didn't go as planned, he's still shooting for April of 2015.

\"I'm going to need to get in front of Alderman Davis and Alderman Wade which was good because now they know who I am,\" Milwaukee Marathon Executive Director Chris Ponteri said.  \"They'd be more willing to meet with me. Have some more conversations with Summerfest on how we can somehow work out a way to make them okay with this.\"

They pushed this decision off a few weeks for now while Ponteri continues to work on his proposal.