NOW: Al Franken accused of groping and kissing woman while on USO Tour

(CNN) A woman accused Minnesota Democratic Sen. Al Franken on Thursday of groping her and kissing her without her consent in 2006 while she was on a USO Tour overseas.

Leeann Tweeden is now a morning news anchor on TalkRadio 790 KABC in Los Angeles and posted her story in a lengthy post on the station's website.

The alleged incidents happened before Franken was elected to the Senate in 2008 and was seated in 2009 following a recount.

Tweeden described the harassment as being part of a script for a USO skit where Franken wrote where he's supposed to kiss her. She writes that Franken repeatedly insisted they rehearse the kissing scene despite her protests. When she relented, Franken, "put his hand on the back of my head, mashed his lips against mine and aggressively stuck his tongue in my mouth."

"Senator Franken, you wrote the script," Tweeden wrote. "But there's nothing funny about sexual assault."

She also included a photo in which Franken appears to grabbing Tweeden's breast while she's asleep.

"I couldn't believe it. He groped me, without my consent, while I was asleep," Tweeden writes. "I felt violated all over again. Embarrassed. Belittled. Humiliated."

CNN has reached out to Tweeden and she's expected to speak Thursday with CNN.

The post does not address whether Franken was reached out to for comment in advance of publishing and includes no comment from Franken or his office.

In a statement to reporters, Franken said he doesn't remember the forced kissing, but said he shouldn't have conducted his behavior as he did in the photo.

"I certainly don't remember the rehearsal for the skit in the same way, but I send my sincerest apologies to Leeann," Franken said. "As to the photo, it was clearly intended to be funny but wasn't. I shouldn't have done it."

Franken released a longer statement several hours after his initial one, where he described a lengthier apology and said he "didn't know what" was in his head when he took the actions in the photo. 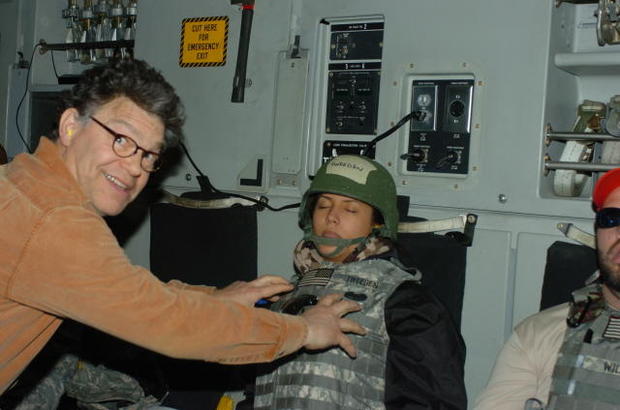 "The first thing I want to do is apologize: to Leeann, to everyone else who was part of that tour, to everyone who has worked for me, to everyone I represent, and to everyone who counts on me to be an ally and supporter and champion of women. There's more I want to say, but the first and most important thing—and if it's the only thing you care to hear, that's fine — is: I'm sorry," Franken said in the email statement.

He continued, "I respect women.I don't respect men who don't. And the fact that my own actions have given people a good reason to doubt that makes me feel ashamed."

Franken continued to say he didn't remember the exact actions of the rehearsal skit, but added, "I understand why we need to listen to and believe women's experiences."

Franken acknowledged that cultural change in his revised statement.

"Over the last few months, all of us — including and especially men who respect women — have been forced to take a good, hard look at our own actions and think (perhaps, shamefully, for the first time) about how those actions have affected women," Franken said.

"I want to have the same effect on them that Congresswoman Jackie Speier had on me," Tweeden wrote. "I want them, and all the other victims of sexual assault, to be able to speak out immediately, and not keep their stories --and their anger-- locked up inside for years, or decades."

Senate Majority Leader Mitch McConnell, a Republican from Kentucky, said the issue should be referred to the ethics committee.

"As with all credible allegations of sexual harassment or assault, I believe the Ethics Committee should review the matter. I hope the Democratic Leader will join me on this," McConnell said in a written statement. "Regardless of party, harassment and assault are completely unacceptable—in the workplace or anywhere else."

Franken said he would cooperate with the committee's investigation.

Murray said, "This is unacceptable behavior and extremely disappointing. I am glad Al came out and apologized, but that doesn't reverse what he's done or end the matter. I support an ethics committee investigation into these accusations, and I hope this latest example of the deep problems on this front spurs continued action to address it. "

Franken mentioned Tweeden on the Senate floor in September 2010 and called her a "beautiful woman" during a speech about his past USO tours and the jokes he would tell regarding the "don't ask, don't tell" policy.

"And during the show I would, I was kind of co-host with a beautiful woman named Leeann Tweeden, and we'd do comedy routines, we'd introduce music, we'd introduce cheerleaders," Franken said. "I'd go out and do a monologue, and this is something I would do, I've done for a number of years, and I'd go out and I would say, you know, I've done now seven USO tours and every year I'm just more and more impressed with the US military, except one thing I do not get, it's the 'don't ask, don't tell' policy."