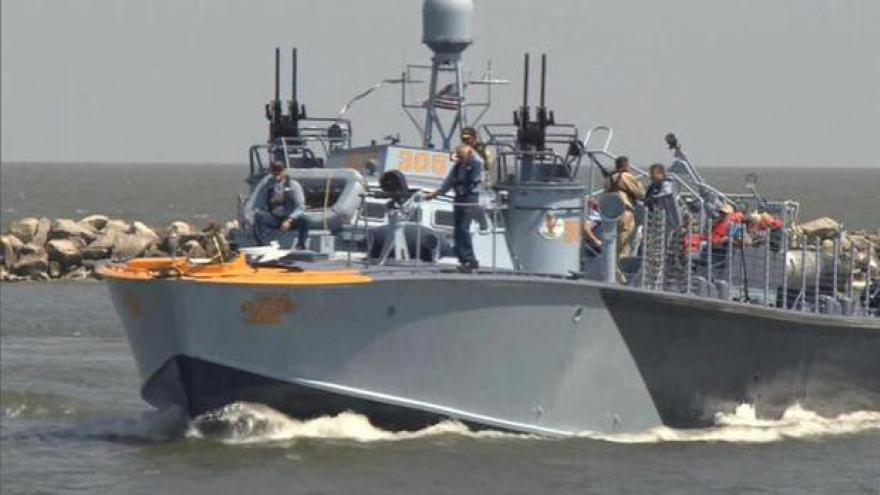 Volunteers at the National WWII Museum in New Orleans spent more than a decade restoring PT-305 to the way it looked in 1944. Patrol Torpedo boats were among the fastest and most heavily-armed vessels for their size, and then-Navy Lt. John F. Kennedy commanded a PT boat in the South Pacific.

After more than 70 years, Jim Nerison is back on his boat. The last time the former Navy petty officer stepped on PT-305, he was about 19 years old. The American Navy vessel was stationed off the coasts of France and Italy during World War II.

On Thursday, the 92-year-old veteran took the fully restored boat on the inaugural ride on Louisiana’s Lake Pontchartrain.

“It sounds the same as it did then, the vibration under your feet, the wake,” Nerison said.

The Patrol Torpedo, or PT boat, is the latest addition to the National World War II Museum in New Orleans. There are plenty of planes, ships and other artifacts for people to see at the museum. Soon, visitors will be able to ride on the world’s only operational PT.

Before it made it back to New Orleans, the boat was barely salvageable.

“I know what a PT’s supposed to look like, so she looked pretty sad to me. She’s just a beat up old work boat,” said Joshua Schick, the museum’s curator.

After her service in World War II, the vessel kept working as a tour boat in New York City and an oyster boat in the Chesapeake Bay. Eventually, what was left of PT-305 was found in Texas. It was brought to the museum to start a vigorous 10-year restoration project. It took more than 200 volunteers and more than 120,000 hours to restore the boat to what it looked like in World War II.

He was just speechless when he we came out, and I kind of had to turn away for just a second and collect myself so it’s amazing,” Schick said. “You know, do all of this work. We put all of this blood, sweat and tears into it, and to have him approve is really all I wanted, and now, let’s teach people about it.”

A one-time torpedo operator, Nerison still has war stories to tell. The one-ton weapon was fueled by compressed air and 180-proof grain alcohol. Sometimes, he admits, the crew would sip the fuel just to make sure they were battle ready.

Nerison plans to ride PT-305 again with his grandkids, so his family can see what it was like on what he calls his boat.

“You called it your boat, after 70 plus years, you still feel like it’s your boat?” Villafranca said.

“Absolutely, you get attached to a boat, you know. ... And whether you own it or you’re just a seaman on board, it’s still your boat. And that’s the way I feel about this one. I may not own it but it’s still my boat,” Nerison said.

PT-305 ran more than 70 patrol missions, but she’s not ready for retirement. Next week, the boat will take history buffs for a ride on Lake Pontchartrain. A ticket is $350 a person. That may sound pricey, but all the tickets for April are already sold out.