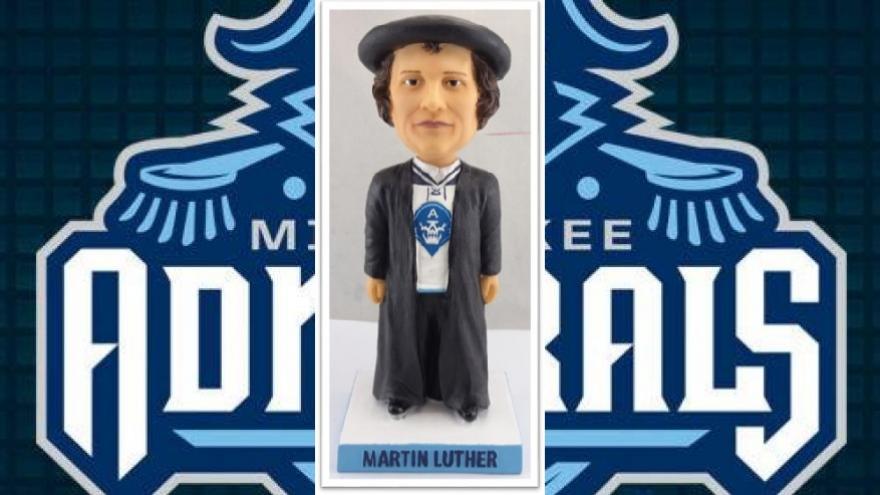 MILWAUKEE (CBS 58) —The Milwaukee Admirals announced the first phase of their 2017-18 promotional schedule Thursday which features many of the team's signature giveaways, promotions and special events as the team begins year two at Panther Arena.

Once again the promo schedule kicks off at the home opener, Friday, October 20 when all fans take home a magnet schedule of the 2017-18 season. The next night when the Ads take on the Hershey Bears at 6:00 p.m., the first 3,500 fans will pick-up a schedule pen, courtesy of Saz’s.

In addition, to celebrate the 500th anniversary of the Reformation this fall, the Ads are offering a very unique package on October 21. For just $20 fans will get a ticket to the game and bobblehead of Martin Luther, a renowned Admirals fans who is sporting his team jersey in the likeness.

The Admirals are also proud to offer all Veterans and active military personnel and their families free tickets to the team’s game on Friday, November 11 with Military Appreciation Night, courtesy of United Steelworkers Local 209. This is the 13th consecutive year that the team has hosted this special night.

The world renowned University of Wisconsin Badger Marching Band will make its annual visit on Saturday, February 3rd, including a special 4th Intermission on the ice following the game, courtesy of Pegasus Partners.

The Admirals will celebrate their annual Global Freight Source Salute to Wrestling on Sunday, February 11th with the visiting wrestlers still to be determined and March 25th will be Purina Dog Day Afternoon where fans can bring their dogs to the game.

The Admirals Concert Series will continue at the Panther Arena this season and will include three or four post-game concerts featuring national recording acts. Performers and dates in the series will be released at a later date.

Once again the Admirals are proud to offer a pair of School Day Games, presented by Baird. On November 8 and March 7 the team will drop the puck at 10:30 a.m., while entertaining in excess of 6,000 local students. The game is a great opportunity for a fun and educational lookat hockey and the business of pro sports.

The Ads also provide many ticket specials for fans, including Winning Wednesdays, which is new for this season. If the Admirals win on a Wednesday all fans in attendance can redeem their ticket for a free one to the next Wednesday game. Not including School Day Games Ads will play seven Wednesday games throughout the 17-18 campaign.

Kids 14 and under and Seniors 65 and over receive half-price tickets for games on October 20, November 24, December 29, January 23, February 6, March 31, and April 4, while at the first game of every month First Responders get the first period free (2/3 the cost of a regular priced ticket).

Another new ticket deal this season is Student Nights. At every Friday home game high school and college students can get tickets for just $9 with their student ID.

Potawatomi Hotel & Casino will also continue to sponsor Chuck-a-Puck, where fans can purchase foam pucks at select games for $1 and then throw them onto the ice for a chance to win great prizes. The proceeds from Chuck-a-Puck go to the Milwaukee Admirals Power Play Foundation, which is the team’s charitable arm.

The Aurora Sports Health Autograph Corner also returns for another year. At 20 different games during the season two Admirals players will sign autographs after the game in the South Goal Tap Room.

Beginning September 5, fans can purchase tickets for any game at the Admirals office, located at 510 W. Kilbourn Ave, during the week from 9:00 am-5:00 pm. In addition, tickets can be purchased over the phone by calling Ticketmaster at (800) 745-3000 or clicking here. Tickets are also available at the Panther Arena and Milwaukee Theatre Box Office.