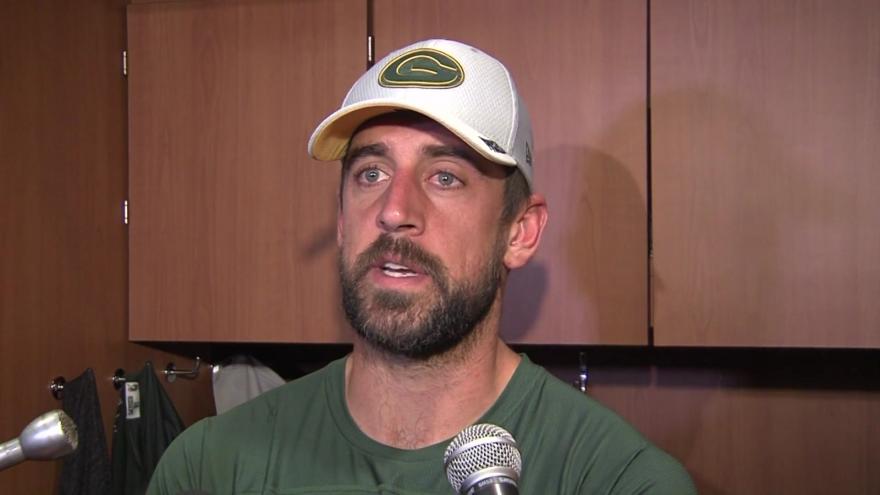 Aaron Rodgers got political in an interview this week, and some fans are saying he should stick to throwing touchdowns.

The Packers quarterback known for his privacy offered his thoughts on NFL players kneeling for the national anthem.

Talking to NFL.com, he said “"I don't know how many times we can say, as a player and as a group, how much we love and support and appreciate the troops, and the opportunities this country allows us. But this is about equality and something bigger than ourselves, and bringing people together, and love and connectedness and equality and social justice, and putting a light on people who deserve to have the attention for their causes and their difficult situations that they're in. You know, people have their opinion -- you shouldn't do it during the anthem, you shouldn't do it during this -- that's fine. But let's not take away from what the real issue is."

“I think he’s wrong for [saying] that,” said Tom Iwinski, a Packers fan.” He’s a player. He shouldn’t say anything.”

Richard Adkins, another fan, agreed. “What happens is they get a name for themselves, and they feel they can speak on other topics.”

Rodgers also came to the defense of NBA player Lebron James in the interview, who President Trump implied was unintelligent in a tweet last week.

Rodgers said James "knows he has the support of his contemporaries in his own sport and in other sports."

Former Packer and sports radio host Gary Ellerson said Wednesday he was surprised but happy that Rodgers expressed himself.

“If you’re telling Aaron Rodgers he should stick to sports, I think you’re off-base,” Ellerson said.

Ellerson said he’s found fans seem to be split in their opinions.

“[Rodgers] is a role model,” Rosanne Repta, a Packers fan, said. “He’s not saying anything controversial or over the top. He’s just saying what a lot of people think.”

Rodgers also praised James for not addressing the President’s tweet, saying “I think that the more that we give credence to stuff like that, the more it's gonna live on. think if we can learn to ignore or not respond to stuff like that -- if we can -- it takes away the power of statements like that.”